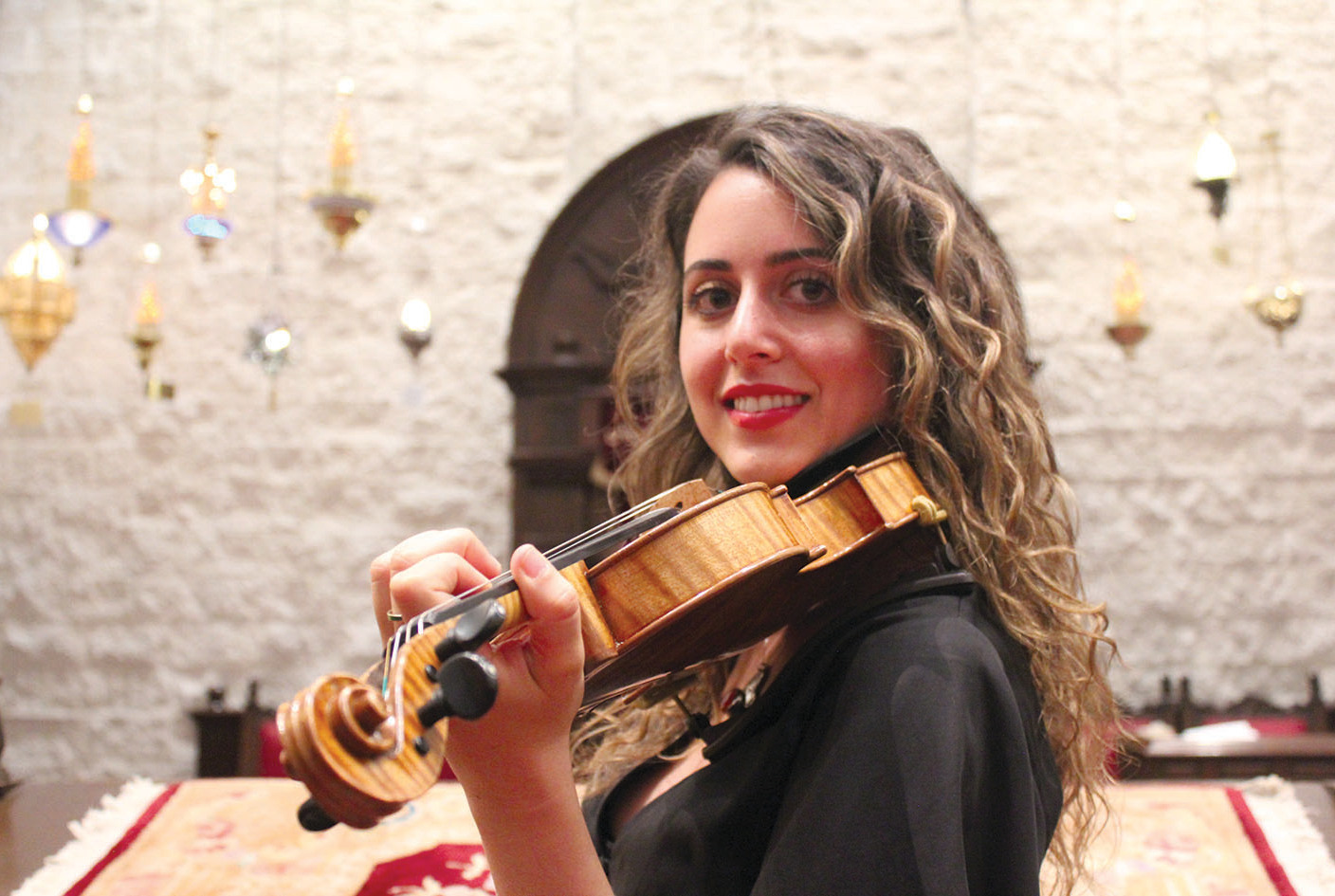 Chloe Pourmorady is an award-winning composer, multi-instrumentalist, and singer known for the versatility of her creative expression. Her debut album “Begin Majesty” by Chloe Pourmorady Ensemble won two awards this past year for music that is innovative yet influenced by tradition.

In my conversation with Chloe, we covered many topics on creativity, inspiration, music and spirituality.  I’ve selected the following portion of our dialogue to highlight points that will broaden your perspective of the creative process and music as a whole.

WM: It’s great to have you here today, Chloe.

CP: Thank you. Will, it’s wonderful to be with you.

WM: Well, to start off, I’m curious about your musical background. Was it a part of your household growing up? And do you remember some of your earlier memories of engaging in music?

CP: So my father is very naturally musical, very naturally gifted. He has a beautiful voice and he’s known for his voice. So I have memories from a very, very young age of him singing to me lullabies before going to sleep at night. I have visual memories of the guitar in his bedroom. You know, he wrote a beautiful song for my mother for their wedding engagement. I have memories of hearing that as a child of him, you know, creating. So I had that in my environment growing up.

WM: Beautiful. Well, I’m curious, Chloe, how many instruments do you play?

CP: I play violin, kemanche, I sing, play some piano and some guitar as well.

WM: Beautiful. I really enjoyed listening to your album “Begin Majesty”, a lot this week. And one question I’d like to ask is, what does this term “World Music” mean to you?  In a time when so many influences can be brought together and the world is becoming more and more easily connected, I’m curious what that term means to you, world music? How do you relate to that term?

WM: So there’s like an inherent universality in these kinds of music that we find all over the world and people relate to from all parts of the world.

CP: Which I think the universality comes from the fact that the music is, it’s roots music, right?  There’s a purity about it that comes from the roots.  You know?

WM: So I’m curious, when you’re working on writing new music or tapping into your creative process, do you have a certain method to that or process or is it something that is a daily practice? I know for me, I have my upkeep of my instrument, my technical work. And then there’s also just a different process of writing and really specifically trying to bring something out and put it into a tangible form. And I’m curious how you approach the creative process and the composition process?

CP: It’s so hard to give a solid answer to that question. And I’m sure for you it’s also a combination of so many different things that inform how you compose or create music. But I do agree with what you said. I think the first thing is keeping that foundational you know, upkeep of your craft, right? Because we’re the vessel. We are the vessel for the creativity that comes through us, right? It’s coming through us. So it has to be clean, has to be clear, it has to be strong, right? It has to be flexible, agile, musically, like my fingers can’t be stiff.  It’s all, everyday we got to be working on that to make sure that vessel is ready to receive.  So a lot of it is just, you know, sometimes practicing an etude on violin, getting in a state of repetition, repetition. And then, in the moment of repetition, all of a sudden like some melody will come and I don’t know where it comes from, but you just catch it.  It’s like this moment of something comes and you catch it!  You grasp that melody or the beginning, that conception of a melody, and hold on to it.  Maybe in that moment where there’s this melody about to be conceived, you can’t finish the whole melody, but there’s something there.  Okay? I’ll write it down or record it. Maybe I’ll let it sit for a few days and come back to it with a fresh mind, and then it will finish itself. So sometimes it’s like that is sort of spur of the moment, you know, when I’m not intending to write something, it just happens in a moment of practicing an instrument, you know, and then in other times if I’m actively wanting to compose something I’ll have an intention.  I’ll visualize, maybe something…. Let’s say I want to write a song about the moon, right? Let’s say I want to write about the sun with the moon. So contemplate the moon. Visualize the moon. Think about how does the moon make me feel at night when it’s a full moon? Like, what is that feeling? How can I translate that? What key does that moon feel like? Does it feel like G minor maybe? You know, is it dark blue?  Things like this right? And kind of just move off of that. Sometimes it will be from text. I’ll take a piece of text. I’ll pick a prayer in Hebrew and find the melody in the words, right? Because all of the words contain melody in them also.  How can I bring the melody out of the text? Sometimes it’s that too.  So many different things… Yeah, and sometimes it’s while you’re washing your dishes, right? Or doing laundry. (laughter)

WM: I definitely relate.  Sometimes it just comes out of just being with your instrument and making music and something emerges and then you think “okay there’s something there” and then it slowly embarks on the process.  And also having an intention of something that you want to express and thinking about it in terms of music, I find that to be very fascinating to see how different people translate an idea or a concept, something from nature, like you mentioned, or a text, a poem and turning that into music.

One of the themes I want to explore with these interviews is that so many of us musicians, we experienced music as a form of meditation, devotion, prayer, and maybe even as a religion in and of itself.  And I’m curious about your relationship between music as a spiritual force. You obviously grew up with music and religious identity, how has that kind of shifted…? This is a very deep question I know, so many layers to it, but I’m curious how musicians relate to the force of music as also a spiritual force. And then how does that come back around to the different religions of the world and the different cultures?

CP: Beautiful question, Will and I’m glad you’re asking this because this is something that actually, I have some experience with, this question and trying to understand it. I think we have to be very careful to not worship music, not bring a sense of space of worship, to music, to the music itself. Or to the music that we create, you know, we have to be very, very careful about that. That as musicians, we understand that we are really just the vessel you know that it’s coming through us. So the only thing on the altar of our souls is God, the divine, and that what we are creating is an expression. You know, we’re gifted every time we create a melody! It’s a gift from the source. You know, it’s coming through us and that our music is really directed vertically, right? In a vertical direction rather than horizontal. What does that mean? First of all horizontal is… (if you’re creating music horizontally, it’s totally fine by the way) if people want to create music for man. Horizontal is like, the direction of your music is more for man. But I like to always remember that my music is directed upwards, more vertical. And when I think that way, it also comes to me from above, rather than from a horizontal place. Does that make sense?

WM: Yeah, so it’s almost like you’re kind of creating a channel that is informing your art and also directing the intention of it and where it’s going. And it kind of becomes like a loop per se. It’s coming from above and it goes above.

And I think that when it comes from that pure place that you’re, you’re really just channeling it. It’s gifted through you and then you also just give it as a gift.  It’s coming from a pure place, and it really is. Then it becomes world music, as we were saying at the beginning, is something that hopefully, the world can relate to, or respond to, or feel, because it’s coming from a pure place of the soul. You know?

WM: Wow. Yeah, these are some just beautiful, deep topics that I’m so glad we could get into today. And it’s just been such a pleasure speaking with you and hearing about you as an artist and a person. And for anyone who might want to study with you or find more of your music, what’s the best way for people to reach you and what you offer?

John Star Icon: Raring to be an icon in the vast media and entertainment field with his astute skills as a video director and editor.