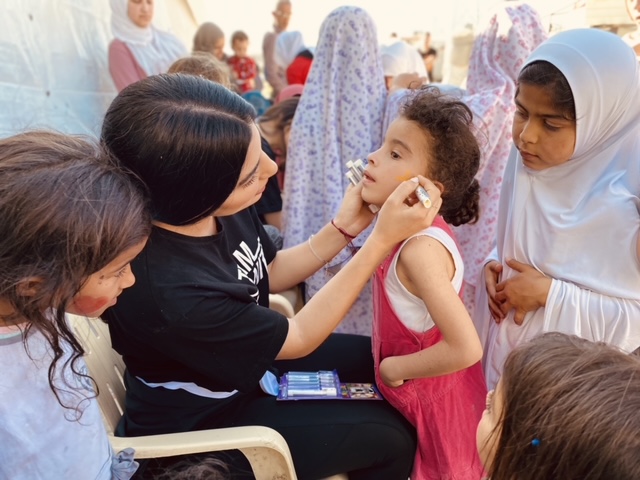 The United Nations High Commission for Refugees (UNHCR) has reported a rising global trend of forced displacement in the past few years. The refugee crisis has worsened as more and more people are forced to flee their homes because of escalating violence and global conflict. As well as dealing with harsh living conditions in camps, many refugees must worry about death on their journey out of war-torn countries.

“It’s heartbreaking to see the world being torn apart by conflict,” says Ayat Abuznade, a humanitarian and founder of Team Humanity USA non-profit. “There are so many refugees who are left homeless and starving.” In response to this global crisis, Team Humanity USA has provided emergency relief in locations worldwide, including Ukraine, Afghanistan, and Lebanon, since 2019. Her tireless efforts have been rewarded with nominations such as Anthem Awards Gold-Humanitarian Product Leader of the Year and Anthem Awards Silver- Humanitarian Service Leader of the Year.

Ayat’s journey as a humanitarian began in 2014 when she volunteered at Zaatari Refugee Camp, a settlement catering to Syrian refugees. Ayat connected with many families and witnessed the devastation the war had brought to over 80,000 vulnerable people during her stay. The most depressing stories were those of children who lost limbs on the way and suffered permanent disabilities they will bear for the rest of their lives. When Ayat returned home to America, she knew she could never go back to just living. Instead, she would spend her life doing her best to improve the plight of the millions of refugees in different parts of the world.

From that point, Ayat traveled widely and volunteered at many refugee camps across continents. In 2015, she traveled to Lesvos, Greece, the epicenter of the refugee crisis sweeping Europe at the time. Thousands of refugees were making their way to Lesvos daily, but unfortunately, there were no large organizations with the manpower and resources needed to turn the situation around. The disoriented, tired, and hungry refugees had to do with the scant resources the small groups of volunteers could mobilize. Without enough resources to go around, many refugees didn’t survive the arduous journey to the border. Having never witnessed such a crisis before, Ayat was overwhelmed and devastated. She made herself a promise; she would not let the issue go unnoticed or unaddressed. That’s why she founded Team Humanity USA.

Team Humanity USA’s mission is to “provide humanitarian and educational outreach to vulnerable communities in the US and abroad by responding to major emergencies, fighting disease, and poverty, as well as nurturing and promoting human welfare.” The organization’s day-to-day operations consist of providing emergency assistance to projects across the globe. In the past, refugees have struggled to receive help. There are many reasons for this: lack of money, fear that they will be seen as a burden, and misunderstanding of what refugees need. After witnessing their extreme suffering, Ayat says those who are fortunate can save people and instill hope and happiness in the lives of people suffering and fleeing war.

On her part, Ayat remains committed to touching even more lives in the future. Her dream is to lead Team Humanity USA and grow it further to continue providing support and helping as many vulnerable people as possible.

David Shands Strives to Create the #1 Podcast for Entrepreneurs