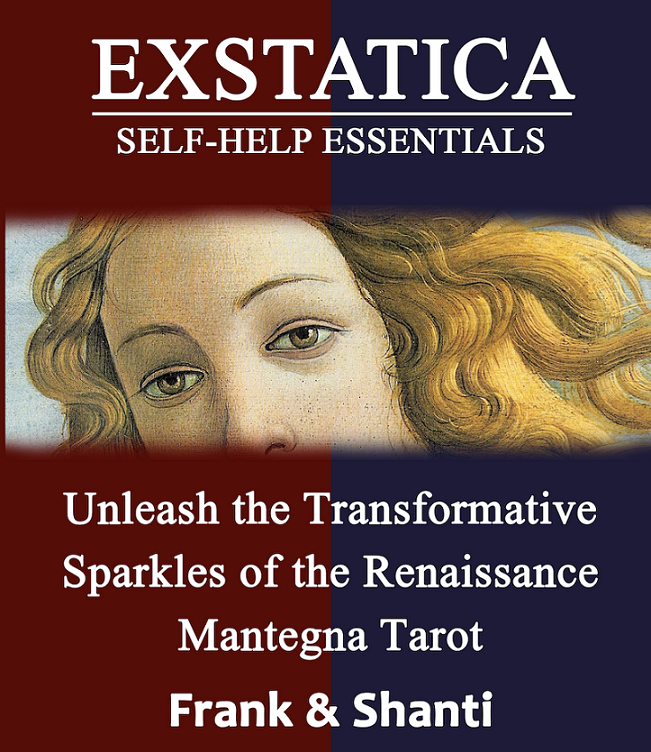 This is one of the best tarot book, to inspire creativity and expand personal awareness. It shows how to turn one’s life into a masterpiece.

It explains how to use the Mantegna Tarot to gain more insights about the Four Spheres of life: behavior, emotions, cognition, meaning. This Tarot book brings easy Tarot spreads. They can be applied to relationships, career, business, etc.

When the Four Spheres of life are in harmony, people live a meaningful life that expresses their full potential, for the benefit of all. When the Four Spheres are not in synch, problems arise. Each of the first four chapters of this Tarot book, analyzes the Mantegna Tarot cards for the corresponding sphere. The remaining chapters explain how to use the cards, integrating them into daily life. There are illustrious precedents, in using Tarot decks for self actualization. For example, Carl Jung was aware of the power of Tarot cards as a psychological tool for individuation. To explore the unconscious, both personal and collective. Aleister Crowley featured his own Thoth Tarot in “Book of Thoth”. Many filmmakers, psychologists, occultists, etc. are using it regularly, to get at the inner core of their essence, and as a source of creativity. EXSTATICA can also be practiced with the Visconti Sforza Tarot, Sola Busca Tarot, Tarot of Marseille, Rider-Waite Tarot, and other major Tarot decks.

When it comes to love and relationships, other top Tarot guides and Tarot decks include: Tarot of the Heart, 50 ways to divine love. Love Tarot for Beginners: Romantic Interpretations for Every Card in the Tarot Deck, The Enchanted Love Tarot: The Lover’s Guide to Dating, Mating, and Relating.  True Love Reading Cards: Attract and Create the Love You Desire. Whispers of Love Oracle: Oracle Cards for Attracting More Love into your Life. Tarot of Love Magic. Lovers Oracle: Heart-Shaped Fortune Telling Cards. The Practical Witch’s Spell Deck: 100 Spells for Love, Happiness, and Success.

Rachel Pollack’s Seventy-Eight Degrees of Wisdom draws on mythology and esoteric traditions and delves deeply into the symbolism and ideas of each tarot card. It gives the tarot cards a modern psychological slant based on the pictures rather than a system of occult symbolism. This useful reference tool provides a concise history of tarot, introduces common spreads, and is a clear and readable book for both the beginning and advanced tarot student.

Filmmaker Alejandro Jodorowsky share precious insights into the Tarot as a spiritual path. His profound study of the Tarot, which began in the early 1950s, reveals it to be far more than a simple divination device. The Tarot is first and foremost a powerful instrument of self-knowledge and a representation of the structure of the soul. The Way of Tarot shows that the entire deck is structured like a temple, or a mandala, which is both an image of the world and a representation of the divine. They explain that the Tarot is a “nomadic cathedral” whose parts (the 78 cards or “arcana”) should always be viewed with an awareness of the whole structure. This understanding is essential to fully grasp the Tarot’s hermetic symbolism.

Tarot exists in the shadow place of our cultural consciousness, a metaphysical tradition assigned to the dusty glass cabinets of the arcane. Hundreds of years and hundreds of creative hands–mystics and artists often working in collaboration, have transformed the Tarot into a source of divination and system of self-exploration, as each new generation has sought to evolve the form and reinterpret the medium. Author Jessica Hundley traces this fascinating history in Tarot, the first volume in Taschen’s Library of Esoterica series. Taschen, the Library of Esoterica explores the symbolic meaning behind more than 500 cards and works of original art, two thirds of which have never been published outside of the decks themselves. It’s the first ever visual compendium of its kind, spanning from Medieval to modern, and artfully arranged according to the sequencing of the 78 cards of the Major and Minor Arcana. It explores the powerful influence of Tarot as muse to artists like Salvador Dalí and Niki de Saint Phalle and includes the decks of nearly 100 diverse contemporary artists from around the world, all of whom have embraced the medium for its capacity to push cultural identity forward. Each subject is showcased through both modern and archival imagery culled from private collectors, libraries, and museums around the globe. The result forms an inclusive visual history, a study of our primal pull to dream and nightmare, and the creative ways we strive to connect to the divine. Rounding out the volume are excerpts from thinkers such as Éliphas Lévi, Carl Jung, and Joseph Campbell.

Here’s Why Diana Was A Princess, But Kate Isn’t: