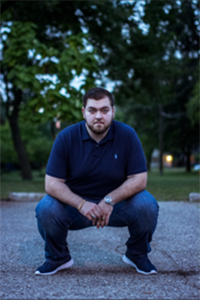 Over the past few decades, the city of Detroit, Michigan has been home to a strong and influential rap scene. Genre defining artists like Eminem, J Dilla, and Big Sean have emerged from the city and gone on to make waves throughout the music world. Looking to add his name to this list is up-and-coming hip-hop artist Big Juicy.

Up to this point in his young and budding career, Big Juicy has released a handful of singles, along with his debut full-length project, Blue Eyes, a collaboration with fellow Detroit artist, JustinDon. Of the tracks he has released up to this point, Big Juicy has done his best to keep his growing audience on the toes, pulling inspiration from various artists, including legends such as Notorious B.I.G and 2Pac, as well as newcomers like Travis Scott and Nav. “I want people to feel my energy. I want them to feel the ups and downs, the bangers, and the sad music,” stated Big Juicy.

Growing up on the East side of Detroit, Big Juicy has been through his fair share of hardships and has come across obstacles along his path for success.“I’ve had to overcome depression and I still do today,” he said. Big Juicy continued, speaking on growing up in an underprivileged household, “I also grew up in poverty, so that was a huge obstacle to overcome, but that upbringing now makes me work ten times harder.”

Working independently, Big Juicy began rapping at parties while attending Michigan State University. He has been working with fellow Detroit artists, like the aforementioned Justin Don, as well as producer DJ Dot, who mixes and masters Big Juicy’s tracks. Strong support early on in one’s career can be tough to come by, but Big Juicy is thankful for all his fans, especially the core he has had with him since the beginning. “Someone pulled me to the side after a concert once and hugged me and told me they felt my energy in all my music,” the DetroitMC went on, “If it wasn’t for all the early signs of support, I would never have wanted to pursue my passions.”Big Juicy is finishing up his next album right now, working long nights and early mornings in order to make his best work to date. “The album will be out within the next couple of months, but I’m in no rush as I plan to make this one perfect,” he said.
Keep your eyes and ears open for upcoming music from Big Juicy on his Instagram, big_juicy99.
Listen to Big Juicy’s music here.
Related Topics:Big JuicyDetroitHip Hop
Up Next

Resilience CBD: A CBD Company You Can Trust