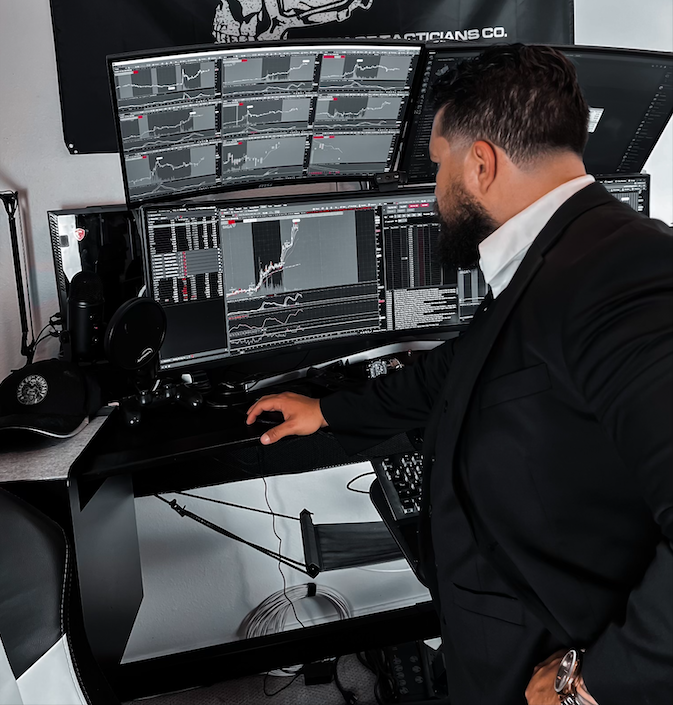 In the world of business and entrepreneurship, it’s not all that common to hear a story of how someone went from “rags to riches”. In fact, the majority of influencers that teach others came from money, and love to flaunt it around in order to drive in sales for their programs.

We all know how that story goes, you pay thousands of dollars to someone who you think can help you, but it turns out you are just one of many who paid someone who can’t deliver, because the reason they have money in the first place is because their family is rich, or because the only money they’ve ever made is from scamming others. You get some basic information anyone can get off youtube and get sent on your way, left with a bad taste in your mouth.

If you’ve been there, you know how hard it is to make a big investment just to get nowhere and lose all hope that you can actually achieve the life you want.

But, deep down we want to know it’s possible, we just need something real, someONE real, who knows what it takes to go from nothing to something and can show us the way. Which is why I believe everyone needs to know the story of Andrew Diaz, aka “The Stock Market Wolf”.

Andrew Diaz might just have one of the most raw, motivating stories ever told. From going from a neighborhood where many don’t make it out, to becoming a single father making $280 a month, to now making millions of dollars a year in the stock market, with thousands of students worldwide.

It all started for Andrew in southside Oxnard California, where many kids ended up doing drugs and in gangs. Luckily for Andrew, his parents enrolled him in football, which Andrew claims saved his life because it kept him off the streets. He played throughout his childhood, but as he got older and into high school, his grades started to slip due to his environment, so his parents made a decision to transfer him into a private school.

It made a radical change in his life, his environment went from toxic to empowering, being a part of a football program that required him to maintain a B average. Andrew and his team would go on to win 2 state championships, which allowed him to develop a champion mindset. Things were looking really good, with college on the horizon Andrew was looking forward to studying to become a nurse and had hoped to continue playing ball in college, but then things took a radical turn.

The summer before college, Andrew found out he was going to be a dad at 18 years old, and within a matter of weeks he lost his friends, his parents went from proud to disappointed, and instead of going to school to become a nurse, he was now working at the mall for minimum wage.

For many, this would have been the end of the road for one’s dreams and ambitions. For Andrew, it was just the beginning. He quickly decided to pursue his college education anyways. While working to support himself and his son, he was also studying to become a nurse, and even received a scholarship into Cal Lutheran University, which unfortunately, he couldn’t afford.

Even with a loan, Diaz didn’t have enough for all four years of college, so you know what he did? To save money, he stacked his classes so that he could get his degree in 3 years rather than 4.

This is when I realized he was simply built different. Diaz, who was a single father, was getting up at 6am, going to school from 7 to 3, going straight to work until 10pm, and then would go home and study until 1-2am, just to get up in the morning to do it all over again.

No free time, no weekends off, no personal life and living at home with his parents. Andrew had an absolute obsession to make his life better for both him and his son, and not take no for an answer. “Some days I didn’t even eat.. I was literally hungry…” Andrew proclaimed as emotion filled the room.

Just when things seemed tough enough, during his second year at college he lost his job for being too busy with school and not being able to work when he was needed. Broken, defeated, and not sure what his next step would be, Andrew went home to see his son.

But, as we all know, when it rains, it pours. Just hours after losing his job, Andrew’s car broke down and his card got declined at the store trying to buy just a $10 pack of diapers for his son… could you imagine? “My parents were so tired, and angry, and rightfully so. It was the lowest point in my life because I was trying so desperately to better my family’s life, but I was broke, failing school, and had now just lost my only source of income” said Andrew.

We could talk for hours about the struggles Andrew went through, but I want to talk about what he did to overcome them. Because most of the obstacles Andrew faced in this short time would have been enough to break a man, but Diaz only got stronger.

After watching a video labeled “How Badly Do You want to Breathe” Andrew picked himself up, swallowed his pride, and did what he hadn’t yet allowed himself to do.. he asked for help. And to his surprise, he got it.

His teachers began spending extra time working with him, he was able to get a new job, and found an obsession for reading and learning after he found the famous book “Rich Dad Poor Dad”. While juggling school and work, Andrew also began developing relationships with reps from the biotech industry that came to his school looking for talent, in hopes of a future opportunity, never passing up a potential opportunity despite the odds so clearly stacked against him.

Diaz ended up graduating in 2014 with his Bachelor’s Degree and shortly after reached out to his old highschool that changed his life, and got himself a job teaching. Ecstatic to be back at the place that made such a positive impact on his own life, Diaz soon learned he wouldn’t be there long, because on his first day in the classroom Andrew was offered an even better opportunity to interview for a Biotech company from one of the reps he met during college, and despite what Diaz claimed to be a horrible interview, he still got the job due to his superior learning about his story as single father, wanting to give him a shot. “I had to pull the car over when I got the call, I broke down in happiness. I thought for sure that I messed up my one shot to land a job there” said Diaz.

After years of late nights, early mornings, empty stomachs and a lot of pain. Andrew had finally gotten a break, and things began looking up. He put in his 2 week notice at the highschool, and soon after left for his new job making $60k a year, more money than Andrew could ever dream of, and yet, he was sad to leave his kids at school after just 2 short weeks, he loved teaching… but nevertheless, Andrew said his goodbyes and began the next chapter of his life.

Andrew now had a stable income, a job that was flexible and that allowed him to pursue his masters degree, and a boatload of leftover cash to begin investing into companies utilizing all the knowledge he had amassed from the books he had read. And, due to his extensive understanding of the biotech industry, he began investing lots of his leftover money into the market of large and small biotech companies.

By 2016, his intuition was right. The stocks he had invested in boomed and Andrew turned his 100k investment into over a million dollars, soon after he takes his girlfriend to Paris and gets engaged to the woman who was by his side through all of this, and for the first time in his life, feels like he was winning… but the story doesn’t stop here..

Andrew, being the standup guy he is, begins to help a family friend with investing into the market, and to his surprise she starts making decent money.. Which is when his fiance tells him he needs to start a company around teaching others, and the rest is history.

Andrew Diaz starts going to events, meets a stock trader, learns how to daytrade, gets his masters degree, and by 2017 is teaching others how to succeed in the market, all while working his corporate job and earning a promotion to become a senior associate.

By 2019, Diaz makes his first million day trading, and when the covid pandemic hit, his program skyrocketed and amassed over 5000 students and Andrew buys his first home for 900k, cash… “To this day that is still one of the most amazing moments ever, I’ll never forget that feeling, to be able to walk inside our new home with my son and show him his room. My son had never had his own bedroom… Now he does. This was my ‘I made it’ moment”.

As Andrew was telling me this I quite literally got emotional, and so did he… reliving such an amazing story, which without Andrew’s dedication could have much more easily been a sad one, but not for Diaz.

Andrew now has 3 kids, has found passions and hobbies and can afford to pursue them, and has worked with thousands of students across the world helping them find financial freedom, and once again was able to find his passion for teaching, just like he did years earlier at his old high school.

An incredible story of how a man, from a small town in California beat the odds, time and time again, and came out of it on the other side of adversity. When I asked Andrew what his message was to the world, it was that anyone can do it, as long as they craved success as much as they craved to breathe (a reference to the video that played a catalyst moment in his life).

Andrews mission is to help others and educate them so that they too can change their current situation and find financial freedom.

So, as someone who is widely aware of the influencers in this world who can be disingenuous, shady, or make false promises, it gives me hope knowing that someone like Andrew Diaz is out there, making a difference.

For anyone interested in working with Andrew, you can do so by sending him a message on instagram, or checking out his program Stock Market Wolf.

From a Third-World Country to Seven-Figure Exit: The Story of JK Molina

Joe Staiber Is The CEO Of Staiber Consulting - A consulting company that specializes in both paid and organic lead generation channels as well as public relations. Joe has amassed over 350k followers on social media and helped his clients generate millions in revenue through media awareness and lead acquisition consulting.