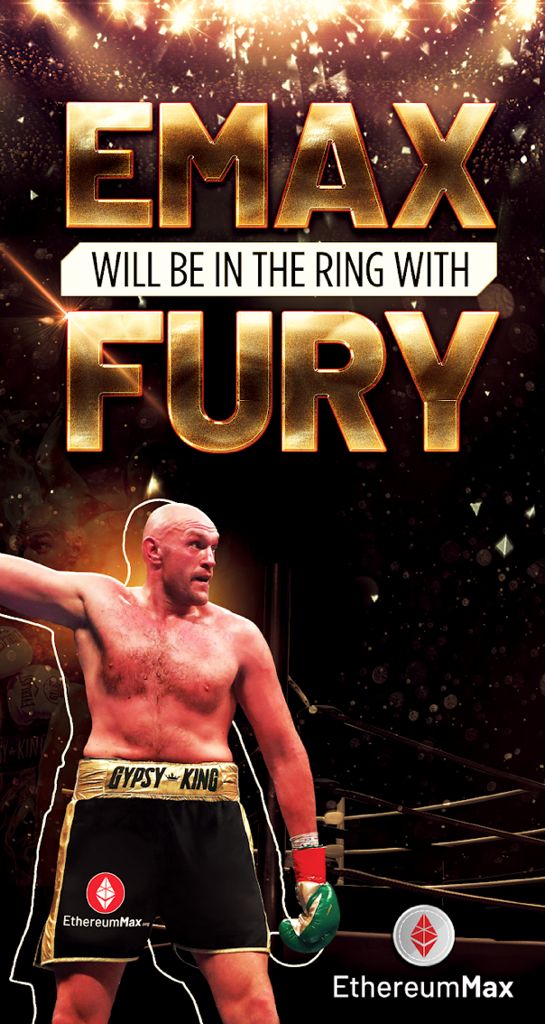 Tyson Fury, the Gypsy King, will be proudly sporting EthereumMax in an upcoming fight where he will be defending his world heavyweight championship title against Deontay Wilder in a highly-anticipated trilogy boxing match. This partnership between Fury and EMAX is sure to bring a lot of attention to this primetime PPV event on October 9th in Las Vegas, and this means a lot of eyes will be on EthereumMax, one of the hottest altcoins in the cryptocurrency space, dubbed as the “Culture Token”.

Sporting EMAX on his shorts, the pair seek to take down Wilder and reign both of their supreme titles as kings. As one of the fastest-growing cryptocurrency communities, with over 110,000 holders in less than 3-months, EMAX is taking the stage front-and-center and will offer what they are calling an “EMAX Experience”. In a recent announcement, they shared that this will include tickets to the fight, a special NFT element, and exclusive signed memorabilia. Fans and holders will be able to purchase packages using either EMAX tokens or ETH. With so much excitement on all ends, anyone seeking to be part of disrupting history is looking to get in on the action surrounding this fight and EMAX.

This will not be EMAX’s first appearance in the ring, though. The community first made its appearance during the Floyd Mayweather and Logan Paul fight in June, where EMAX took center stage, and their cryptocurrency legitimacy was solidified. Now making yet another fight appearance where a world heavyweight title will be defended, the stakes are even bigger, and it’s is clear that EMAX has one thing on its mind: winning. Don’t miss the PPV championship fight between Fury and Wilder on October 9th as EMAX and Fury enter the ring in Las Vegas together and seek to disrupt history yet again.

So, What is EthereumMax?

This is not the first time that EthereumMax has been featured in the news as they caught the attention of the world when the token initially increased its value 1,370% over a two weeks span.

According to team members of the project, “EthereumMax ($EMAX) is a progressive ERC-20 token built on the secure Ethereum network. EMAX is not just another one-and-done cryptocurrency token; we’re a serious long-term project with a vision, roadmap, and united community to accomplish lofty goals few have ever imagined, let alone concurred. Our vision is to merge the worlds of community-driven tokens and the well-known foundational coins of crypto, creating a unique token that provides lifestyle perks, real-use utility in the form of payment processing, and NFT ticketing for events – all to create a pathway for practical long-term use for our holders. EthereumMax is a project still in its infancy stage, being only four months old. With prominent nationwide events on the horizon and a robust NFT marketplace in the works, the EMAX story has only just begun. We believe everyone can benefit from how cryptocurrency will transform the world, and we want to be a pathway to help people get there in a safe, responsible, and educated manner.”

EthereumMax certainly has some big plans in mind. With cryptocurrency being an increasingly competitive space, only time will tell who will reign supreme as a coin that not only has real-life utility but is widely accepted by the masses.

Related Topics:EMAXTyson Fury
Up Next

A Led-by Example in the Space of Technology and Innovation: Ja’Baree Allen

Meet Bobby Umar, A Professional Trainer and Motivational Speaker in the Field for the past 15 Years