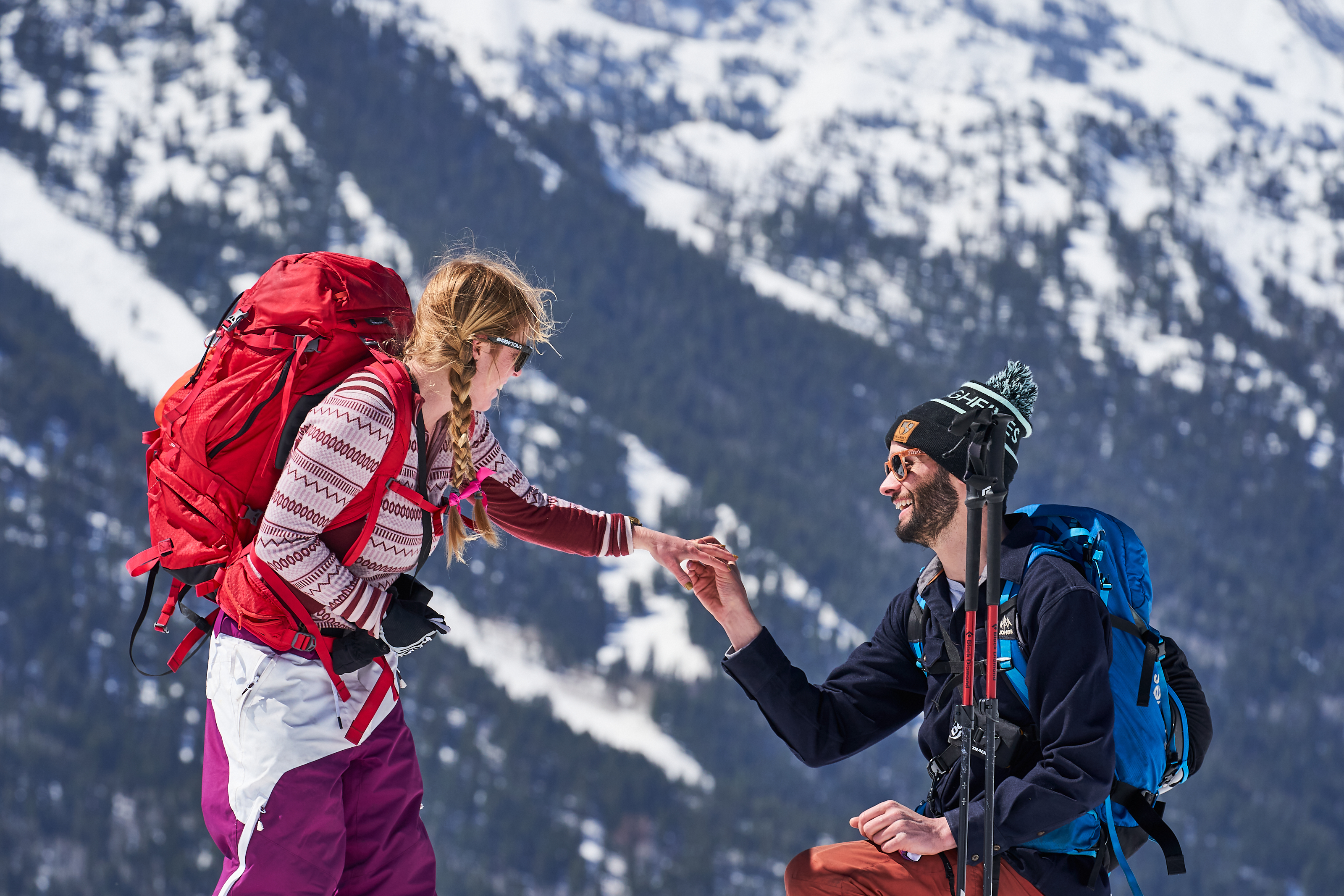 Jamie MoCrazy spent her adolescent years on the ski slopes. By the age of 18, she had already achieved the award of being Junior World Champion and then began to move to Utah to further her training as a professional slopestyle and halfpipe skier. During the rise of her career, Jamie had an incident that would affect her for the rest of her life. In April of 2015, Jamie crashed at the World Tour Finals, leading her to be in a coma, becoming paralyzed, and in an instant, she went from being one of the world’s best slopestyle skiers to having to relearn basic motor skills. Basic skills she has to relearn included walking upstairs and riding a bike. However, Jamie was not going to let the results of her horrific accident keep her down. Rather, she worked hard to recover and relied on the support of her friends and family, being able to keep optimistic for her future. Eight months after her accident, Jamie did the unthinkable, she was able to start skiing again. Not long after, she began college and started her journey of motivational speaking to inspire others to succeed in the face of trauma.

After her recovery from her accident, Jamie has made a name for herself. Speaking in front of audiences ranging from 20 to 1,000 people and presenting at nonprofit galas, business conventions, and medical schools across the world. The MoCrazy family has worked to support Jamie during the difficult times in her life and were able to become caregivers for her during this time. Jamie strives to support others who go through similar accidents and her family works to help caregivers take care of the responsibilities that are placed on them usually without warning. Jamie and the MoCrazy family have used her journey as something productive in order to help others undergoing similar situations.

Jamie and the story of how she not only overcame an accident that should’ve ended her skiing career but how her family and now fiancé Reggie have supported her are inspirational. Jamie was dealt a difficult hand but her relationships have aided her in getting her life back to normalcy. We were lucky to speak with Jamie and she gave us exclusive details about her engagement and key insight into her life journey. The team at Disrupt Magazine applauds Jamie and her story and wishes her all the happiness in the world after her engagement.

We heard you recently got engaged, can you tell us about how he proposed?
Well, my partner and I had already bought and reconstructed a house, had a doggy, been dating for years, and were ready to take the next step. April 11th is the day my TBI accident happened which changed my life. I call it my alive to thrive day! It is also Reggie’s (partner’s) birthday! I thought that was such a monumental, cute, corny coincidence that for years since I decided I wanted to marry Reggie I wanted to start my chapter with Reggie on that day. Since it’s already such an important day it was easy to go ski touring for the day up a big mountain in the Wasatch backcountry. It was an easy idea, yet actually very difficult! It was spring so it was melty and icy, plus we had to be very careful of avalanche danger! Anyways, when we got to the top we went to get our picture taken by the photographer taking Alive to Thrive pictures. We were standing there posed, and then Reggie knelt down, pulled out an amazing MoCrazy style ring, and said he wanted to spend the rest of his life with me! Would I marry him? I was so excited I started crying and rambling about how great this was, he then asked if that meant yes? I laughed and said YES!

What was it like getting engaged on the anniversary of your accident?
When Reggie and I started dating 3 years ago I told him I was done with adventure and drama movies about my life. I was ready for a romantic comedy! Since then our relationship has been full of romantic comedy scenes. I feel it is a perfect scene in our romantic comedy to get engaged to start a new chapter of life with my love on the same day my professional ski career chapter ended 6 years prior.

How did you meet him/ start dating?
Reggie and I met through a mutual friend at a bar. That night we decided to make plans to go camping with another friend. After that camping trip, Mama MoCrazy was 100% convinced we were in love with each other. We were both sure we were not in love, in fact, Reggie thought I was cute yet I definitely friend-zoned him. He wanted to be my friend so we would mountain bike, go ski touring, even see an eclipse together in another state all before we were dating! On the closing day of the mountain we were outside sitting on a snowboard bench at the house Reggie was living at. Of course, we were going to the closing day festivities together-just as friends. That morning I leaned over and randomly asked Reggie if he ever thought about kissing me. Reggie with his mouth full of cereal responded with a kiss! We went to closing day and then the next weekend all of our friends backed out of a trip to Moab, but we still wanted to go- just as friends. On that trip, I spent the entire weekend asking him hypothetical questions about us dating. I guess the answers were good cause he started spending nights at my apartment and six months later we were living together!

When are you planning on having the wedding?
Again with the romantic comedy scene, I want to get married at a lodge mid-mountain in Whistler CA, right below the run that had the competition I crashed at and went into a coma. It gives me shivers to think the same place my fatality report was written I get to marry the love of my life! Since I am so passionate about the location of the wedding and covid restrictions concerning travel I am not 100% set on the date. However, we are planning on memorial day weekend 2022! That way all our American friends have an extra day off work! Which they will want because it will be the event of the year!

How does your relationship support you?
Reggie and I support each other so much as partners. Finding a life partner who truly supports you is one of the rarest and wonderful aspects of life. Support is not just blindly agreeing with what you say, it is challenging you to perform at your personal best every day to design your dream life. Reggie supports all the work I am doing creating the MoCrazy Strong brand. He truly believes in me and will question actions so I only pursue ideas and plans that will work. I support Reggie as well. He has his own dreams and vision. He hasn’t posted on his Instagram account in over a year, however, in that time he has taken over Instagram accounts with me (Woodward Park City, Solitude Mountain Resort) He performs his own personal best at work every day and since the pandemic started has just received raises and promotions! He went from Engineer to now Production Manager at the Salt Lake City office of Curtis Wright! I admire him for his skills and he admires me for mine. I know because we are very communicative and tell each other what we admire about each other on a regular basis.

I know you are extremely close with your family, is your fiancé close with them as well?
Reggie is not quite as close as me haha yet Mama MoCrazy and I were pulling him through the water in Puerto Rico recently and he kept saying if there were two people in the world he trusted it was definitely us. The relationship has grown as I think any true relationship does. It takes time to build a trust and relationship. He immediately liked my family and now thinks having Mama MoCrazy live about 15 minutes away to watch our kids when we go mountain biking sounds like a great plan!

You were able to interview the founder of the High Fives Foundation, how did that foundation support you during your recovery?
High Fives is an AMAZING foundation! I love their description on the website: “in partnership with healthcare we provide human care.” That sums them up very well. High Fives has disbursed 4.8 million dollars to 392 athletes (grant recipients) since inception. For me, personally High Fives gave me grants to financially cover chiropractic work, mental health, supplements, brain therapy bootcamps, and for the first 3 months after I returned home from the hospital massage therapy every day!

What inspired you to start this series?
Mama MoCrazy has been studying the brain for 40+ years and has the prerequisite like person centered education that allowed her to be the most informed caregiver I could have. And the changes she made to my recovery created the outcome I experience.

How do you feel about skiing now, after recovery?
I still love it. However, it was challenging for me to love the terrain park again after recovery. Becoming a coach for the competitive girls at Team Park City has opened a new chapter in my life where I can coach individuals and watch them achieve their dreams (yes I think my life is a book and a movie).

What do you hope people learn from your story?
The secret to how resilience comes from performing at your personal best every day. When I did my first flip on snow I didn’t know I would become the first woman in the world to land a double flip at X-Games, however, if I didn’t perform at my own personal best every day with my attainable goals I never would have reached my growth goals. The same is true with my relationship with Reggie. If we didn’t support each other as friends and always be the best individuals we could be before we started dating that relationship would not have been built. I hope people can learn from my story when they slide down their first life peak they can choose to climb an alternative peak with the best views!

How Addison Guerra Made A Name For Himself