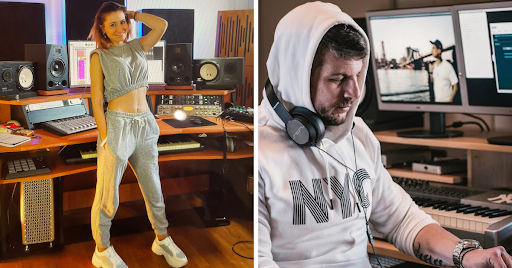 This has been a tough year for all business sectors, but entertainment is a sector that has been hit the hardest–and especially the music industry. Music artists across the world, small and large, have had to push the brakes on live shows, engagements, and even networking due to the pandemic.

Even the most established artists have had to lay off staff due to the thousands, and sometimes millions in revenue drying up completely. Entertainment capitals like Las Vegas that host world famous artists like Cher and Gwen Stefani for high profile residencies have suffered tremendously.

For some artists, though, this pandemic for all of its trials and tribulations has paved the way for further digitization of their careers. Social media, as a result, has become less of an outlet and place to be completely immersed in.

Audie B, a French-Australian artist who’s presently based in Paris, France, was initially uncertain as to how to navigate the “new normal.” Known for songs like “Back in the Game” and “Scandalous,” and possessing a gritty yet upbeat candor, Audie had her sights set on the American market this year.

“I had planned to travel to Los Angeles to network and produce new music, then the pandemic totally changed that,” Audie said.

Thankfully Audie has a very active Instagram account that she knows how to strategically leverage to her advantage. It was on Instagram and through her publicist Nadya Rousseau that Audie connected with Los Angeles-based producer and entrepreneur DJ Bander, whose interest was piqued by Audie’s unconventional sound and vibe.

“This is a crazy time, but it is an amazing opportunity for artists, producers and anyone in the industry to diversify their network and connect with people abroad. We live in a global climate now and the pandemic just reinforced that.”

The introduction was on substantial grounds—Audie B had just gotten a prominent West Coast rapper, The Game, to intro her new record and feature her in his official playlist.

2020 was clearly a pivotal year for new remote collaborations for multiple artists. As the pandemic fueled the use of social media platforms, streaming and the motivation to utilize the internet to not only professionally complete, but also to promote new projects between producers and artists has also become “the new normal.”

The initial track that the two will be working on is likely only the beginning of what will likely be a long-term collaboration. Audie also has plans to come to America (for real) once the pandemic has improved.

Related Topics:ArtistAudie B
Up Next

Accept Yourself as You Are, and Your Life will Change