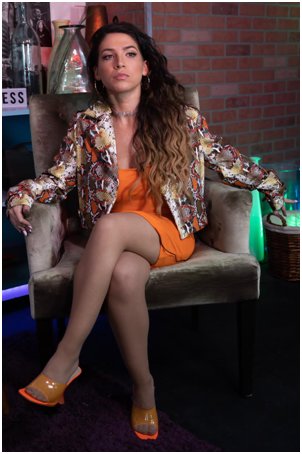 Did you listen to GiGi Vega’s latest pop music ‘Watchu Tryna Do? If not, then you should do it now. Her latest single has turned out to be hugely popular with the audience for its eccentric tune and flawless choreography. The single is now attracting a massive audience across the globe and continues to grab the attention of more and more music lovers.

Gigi Vega is the America’s latest pop sensation and she created a history of sorts through this pop number proving her talent and ability to add versatility to her songs. Gigi Vega is also a choreographer and dancer of repute performing several shows on the stage at the international level.

How It All Began

Born in Boston, GiGi Vega has established herself strongly in the realm of pop music. Her earlier number ‘Mistletoe Kiss’ also clocked an enviable 3rd rank on the iTunes Dance Charts and 27th on the Billboard Adult Contemporary (AC) Charts.

‘Mistletoe Kiss’ featured in ‘The App that Stole Christmas’, a Netflix film as well.

No wonder, her latest single ‘Watchu Tryna Do?’ also recorded massive popularity with a vast number of listeners appreciating it from across the world.

Music lovers post their appreciative comments on this song on various online forums and social media. Gigi Vega is quite active on Instagram and often interacts with her fans.

Gigi Vega’s Collaboration with Other Artists

GiGi Vega, a well-known name in the pop music world, worked with different music producers in her career. It further helped her chisel her talent and musical career.

“Watchu Tryna Do?” was released under the music label, BreakOut Music.

The second bounce mix of ‘Watchu Tryna Do?’ will feature Big Freedia and hitmakers BlaqNmilD (Drake, Beyonce). The remix versions of the song will be launched soon. Most probably, Gigi Vega’s fans and music lovers can expect both the remix versions to get released in the next few months.

Known for her upbeat music coupled with a strong yet mellow voice, Gigi Vega creates an atmosphere of energy and happiness through her numbers. Her numbers are liked by people of all ages. Her popularity can be gauged by the fact that “Mistletoe Kiss” turned out to be a super success in a very short period of time.

“Watchu Tryna Do?” released on January 22, 2021, has already pegged an enviable #50 on the Top 40 Radio Charts & #26 on the R&B iTunes Charts. The pop number recorded a massive 1.5 million views. Gigi Vega’s melodious voice further made it attractive.

Your Key To Accomplishing Your Home Ownership And Financial Security Goals: Mike Bartoli