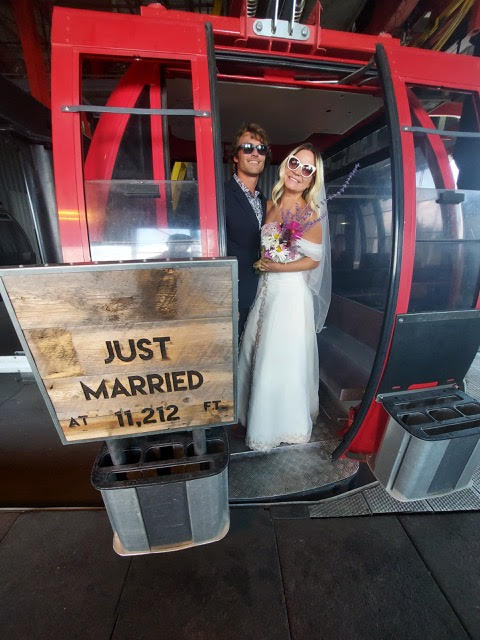 Oliwia Szczekot (31)and Cody Szczekot (31) know how to live- getting married on the Aspen Mountain, on August 20th – a beautiful sunny day. Oliwia Szczekot (previously Biela) is an international Painter and Owner of Oliwia Biela PR ,that had several shows in NYC, Hamburg, Germany, Spain and is now getting ready for her first art show in Boca Raton in Florida at Saks fifth Avenue in Collaboration with CYGALLE BEAUTY.
Cody is owner of Suncat watersports therefor a  jet ski instructor and piano player in Florida & snowboarder in Colorado. He has met Oliwia at a local bar in Florida last year and they both fell immediately in love. Oliwia was visiting FL and was planning on staying for a week or two but ended up extending her vacation until they moved in together.
He introduced the Watersport, skiing and camping to his now wife and they both developed a huge affinity for camping and spending time in the nature. Travel is their drug!
Since he lived for severals years in aspen, Colorado the Aspen Mountain is like his living room and that’s where ehe wanted to marry the love of his life.
The couple decided to have a personal and private wedding with a spiritual ceremony and primitive camping right after before the snow falls again and that special magical area won’t be accessible anymore.
“ This was the perfect weekend for us to get married since it was the last blue full moon this year.camping out on the full moon is something that everyone should experience at least once in their life, “ says Oliwia.
It has improved my life enormously to spend more time in the nature. Sleeping on the ground ,waking up in the forest and washing my face in the creek. Being a lot in the nature brought me closer to myself. I was able to give up drinking, Meditate more effective, have clear goals and take care of my body better.” So she says.
“I found my soulmate and right after , I have found myself. It is  real and everyone deserves it, “ Oliwia adds on.
The couple traveled through the whole United States together discovering new camp spots and there is so much more they are planning to discover like Europe, Asia and everywhere where they haven’t been yet.
Their new projects is to create more awareness for sustainability through cleaning up camp sides and beaches nationwide while they travel. This is our planet and our responsibility.
@oliwia_szczekot
@cszczekot
Oliwiabiela.com
Related Topics:
Up Next

Behnood Javaherpour, who has enthralled the world as an art curator and fashion designer, gives his take on Islamic Art.

How Technology Is Changing An Entire Generation