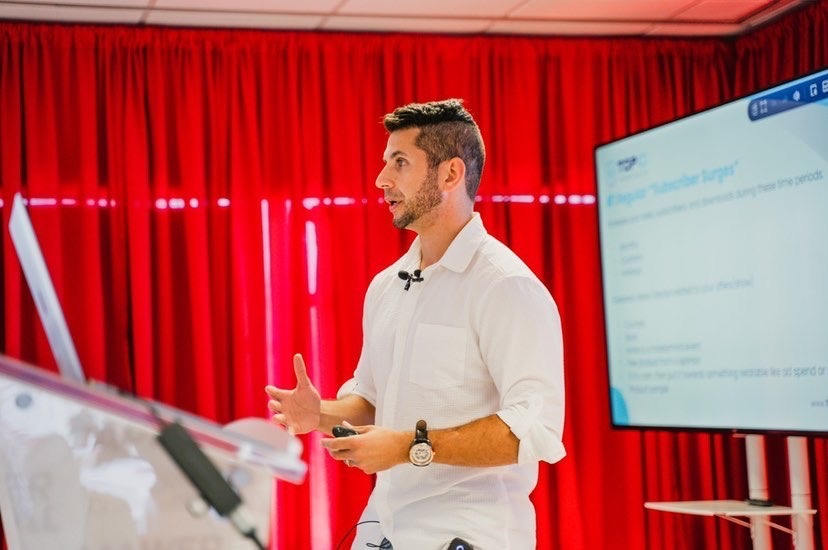 After Luis Diaz had earned his college degree, he found that he needed to work two jobs in the food industry just to make ends meet. He would take on long shifts at one restaurant, then he would have to immediately turn around and head to the other. On top of the restaurant commitments, he also aimed to launch an online fitness training business.

Needless to say, this schedule didn’t allow Luis to live a fulfilling life. He had very little time to work on anything he was interested in, as every free moment he had was dedicated to work. Also, he obviously had to sneak in some meals and a few hours of sleep each day as well.

However, on his commutes to and from work, he had the opportunity to learn through the wonder of podcasts. Luis would listen to anything and everything related to marketing, social media management, sales, and personal development. He truly could not get enough of this material.

Because Luis was so interested in these podcasts, he often discussed them with friends. He would reiterate interesting information he learned from his favorite shows and he would simply light up whenever he talked about these subjects.

One of his friends took notice of how much Luis loved podcasts, and made a somewhat off-handed remark that Luis should consider starting his own show.

Luis didn’t even consider this possibility at first. For one thing, he was way too busy to devote any time to a podcast. Furthermore, he didn’t know the first thing about making a podcast, let alone how to make a successful podcast.

However, something about this idea stuck with him, and he discovered an $11.00 course on Udemy that instructed students on how to create a podcast.

TURNING AN 11 DOLLAR COURSE INTO A HUGE PROFIT

Luis followed the course instructions to the letter and launched his first show a few months later.

He produced 14 episodes for this show and decided that podcasting was not for him. After all, it took him over 5 hours to make a single episode. These were hours that he didn’t have to spare based on his insane schedule.

But even after quitting on his first podcast, Luis still found himself drawn to the podcasting life. He researched his favorite podcasters to determine what it was that made their shows great. Creators like Tim Ferris and others seemed to have found the magic formula to make one quality episode after another.

FINALLY, IT ALL CAME TOGETHER

Then it all clicked. He figured out the ingredients for a successful podcast and began to grow an audience for his new show. From there, he decided to help others learn how to grow their audiences and produce excellent podcasts.

Today, Luis has had a hand in helping with over 145 different podcasts which have been downloaded over 14 million times. He’s worked with athletes, entrepreneurs, business moguls, and others.

Luis’s story goes to show how hard work, dedication, and the willingness to learn can help anyone achieve their wildest dreams.

The Accidental Entrepreneur, A Founder’s Story with Michelle Symonds