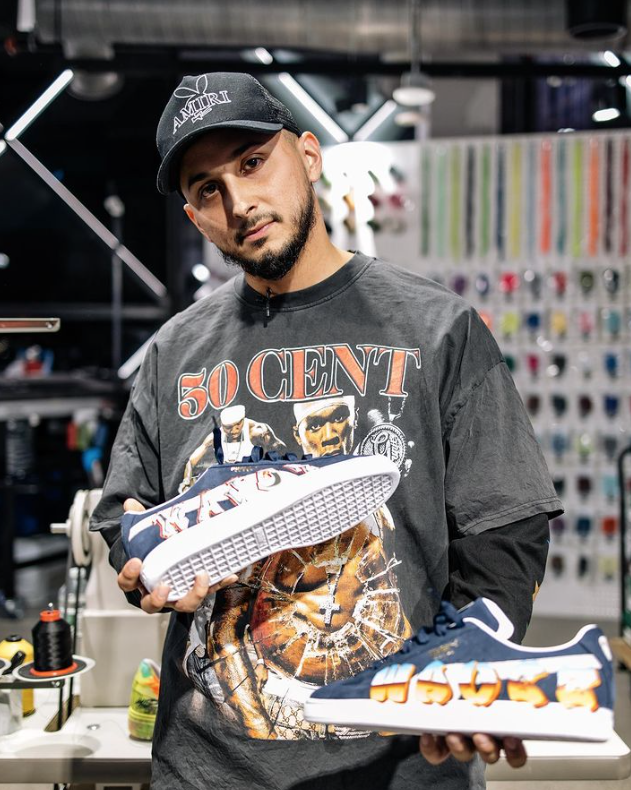 Sneaker culture has formed a community of sneakerheads who love streetwear fashion. Within this community, artists have also showcased their talent through making custom sneaker designs, usually adorned on Nike Air Force 1’s or Vans. It’s not solely the allure of owning an exclusive sneaker anymore, but one that is even more unique and catered to the tastes of a specific person.

Enter Ruben Barraza, the founder of Majorwavez Lab, a studio built to teach others how to make their custom sneakers. Barraza, originally from San Diego, moved to Los Angeles a few years ago and worked in retail where he climbed up the corporate ladder. Alongside his daytime job, he was customizing sneakers, inspired by various things from high fashion to trends and even vintage, his main inspiration. Barraza’s designs started to go viral on social platforms — one such custom design being a Caspar shoe with Metallica Lightning Bolts onto a Vans.

When Barraza’s designs started taking off, he was getting attention from A$AP Rocky, whom he collaborated with for his Under Armour collection, along with Kodak Black and Tyga. Although people took notice of his work and the designer started receiving many orders, Barraza realized how much he missed the meeting new people aspect of his job. Tying what he liked about his retail background, he came up with the idea of opening a ‘Build-A-Bear’ for custom shoes.

To launch Majorwavez Lab, Barraza rented out a studio and advertised free classes for the first week, which went viral on TikTok. In a time when people miss experiencing and having a sense of community, the classes offered just that and sold out for the whole first month. With Majorwavez’s success, Barraza has opened up a location in the Northridge Mall and another planned to open up in Las Vegas.

However, it wasn’t all easy sailing for Barraza when he initially launched Majorwavez. He recalls many people who didn’t believe the concept could be successful, as earning sponsorships proved to be a challenge. However, two months in, Nesquik was interested and is now not only given out in all the locations but also shares a name with the lab in LA. Along with Nesquik came Puma, who offered the company both cheap and free shoes, and Angelus Direct, the paint company, sponsoring Majorwavez with their paint and shoelaces.

These three sponsors are still great supporters of Majorwavez as well. From collaborating with Nesquik for Art Basel in Miami to doing ComplexCon with both PUMA and Nesquik, the creative possibilities for the brand have been endless. In addition, PUMA had Barraza fly out to their headquarters in Boston to teach their marketing team how to create their own customs. In the near future, Majorwavez will reappear at both Art Basel and ComplexCon, and will also make an appearance at the PUMA flagship store in New York.

If interested, you can catch a two to three-hour class at the Majorwavez studio in LA on Fridays, Saturdays, and Sundays at 1 o’clock where you will fabric shop for your custom shoes, have it assembled through gluing and sewing, and finish it off with the best part by customizing it the way you want.

Armin Ordodary: An ace FinTech Entrepreneur, Business consultant, Digital Marketer and What Not!

Why Did Scott Hughes Build an Online Community of Book Readers?