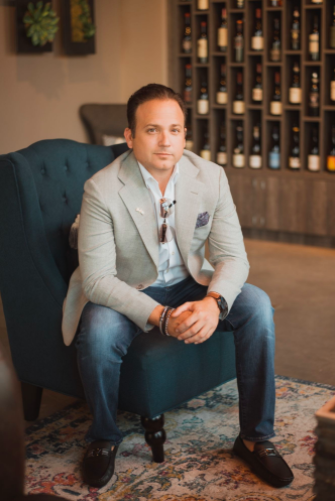 If you love music and especially electronic dance music, chances are you have probably heard of Michael Beas, CEO and Founder of Raver Magazine. For over 7 years he has worked relentlessly to build one of the top dance music magazines in the world. Over the years, Beas has interviewed artists the likes of Armin van Buuren, Ice-T, Morgan Page, CID, Nicky Romero, Tiesto, VASSY, Sander van Doorn, Afrojack, David Guetta, Laidback Luke, Hardwell and so many more. He has traveled the world covering endless dance music festivals such as Ultra Music Festival, Miami Music Week, Amsterdam Music Festival, Amsterdam Dance Event, Imagine Music Festival, TomorrowWorld, and Electric Daisy Carnival.

At the age of 24, Beas was at the top of his game selling commercial insurance for one of the top insurance companies in the world. He quickly moved through the ranks within the organization and within five years he built a book of business that surpassed all his peers. He was quickly promoted within the organization where he helped other agents along the East Coast closeout deals needed to secure business and revenue for the company. While the money coming in was good, the endless travel and constant stress of finding the next sale drove him to retirement at the age of 29.

“The money and the thrill of the sale were fun and exciting but at what cost in the end?” Beas added in an interview conducted in New York City last month. “At times, you feel like you are on top of the world, but this time I felt like I was alone working for a company that in the end wasn’t mine, to begin with. I needed to find my passion for doing something that I really enjoyed. I took time off to reflect on what was important to me and got even more lost along the way. The time off, while in theory was a good idea, turned out to not be what I had envisioned for myself.”

The Road to Becoming an Entrepreneur

Every journey has a story, and Michael’s began at a very young age. The first company he bought and sold was at the age of sixteen. Throughout his entire college life, he worked in both the technology and finance industries, for corporations such as Lucent Technologies, AVAYA, and Citigroup. After earning his degree in business marketing, he moved to the insurance industry as an Account Manager, responsible for selling commercial insurance throughout the Carolinas. It was there that his business skills took shape and he found himself progressing quickly through the ranks of the company. Eventually, he grew to manager over 500 agents and a book of business that toppled 250 million dollars. During that time, he also bought and sold five different companies, one of which included an import and export business that delivered goods throughout South America.

“I consider myself to be a self-professed entrepreneur who always admired the entrepreneurial spirit. While selling insurance to business owners I always found myself admiring the work and risk they put forth to be successful.  To risk it all to build a company and, in essence, be your own boss is something that always fascinated me. At the time, working for a company was a great experience but I realized that I needed to do more; I wanted more, I wanted to build my own company and own my own brand.  I was burnt out and needed a change in my life, so I decided to walk away from the corporate life,” he shared.

After a break from the business world, Beas realized that his love of music and writing was missing from his day-to-day life. The next spring, in 2016, he attended Ultra Music Festival for the first time, and it was there that he realized that electronic dance music was the passion that he wanted to pursue.

“I remember coming up with the name Raver Magazine. At first, everyone thought it was a crazy idea. I got turned down by every manager and every artist, but I didn’t give up. When you have passion and dedication for something, you never settle and give up. You put all your energy and drive into it so that it becomes successful. I am of the belief that it doesn’t matter what people think of you in life, but what matters is how you see yourself. How you motivate yourself every single day is at the heart of what makes you the person that you are. For me, giving up is never an option. I would rather try and fail to start a business and have it turn out unsuccessful than to not do it at all. I feel that a lot of people have great ideas and desire to become their own boss, to make their product and start their own business but they just don’t see it through to the end. The truth of the matter is that it will always be a “side hustle” if you treat it like one. Have the courage to push yourself to the limit and you will see how far your vision and goals can go.”

To date, Raver Magazine receives an average of 50,000 page views a day. There are currently 18 journalists and photographers that cover events all over the world. With over 9,000 published articles and countless interviews, it is one of the premiere dance music magazines in the world today. Raver Magazine is just one small snippet of all the successes that Michael Beas has been able to accomplish in both business and life. His personal story is both moving and inspirational and we encourage you to connect with him on not just music, but also on advice pertaining to books, publishing, and achieving your own personal life goals.

For more information on Raver Magazine visit www.ravermag.com and to keep up to date with Michael Beas you can find him on Instagram by visiting https://www.instagram.com/beasmichael/ or on Linked In: https://www.linkedin.com/in/michael-alexander-beas-96381492/

ARTIST BRENAE IS A NEW ONE TO WATCH