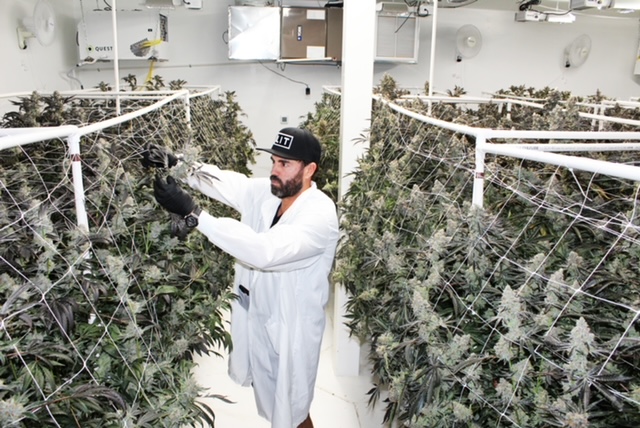 “It starts with the seed, like all plants,” cannabis entrepreneur and CEO, Ray Shiavone told me when I asked him to explain how cannabis growth and manufacturing work.

Schiavone is CEO and owner of Tahoe Hydroponics and as well as the creative mind behind LITFarms, the latest cannabis startup from Schiavone.

In an interview with Schiavone, Disrupt learned about the Nevada cannabis market with respect to cannabis cultivation, as it pertains to operating two facilities of such a large magnitude, and quite successfully.

Located in Carson City, Nevada, Tahoe Hydroponics, or “Tahoe Hydro” is an award-winning cannabis cultivation which is known for having swept the 2016 Jack Herer Cup, taking home 1st place for best Indica, Sativa, and Hybrid flower. The company is known for its determination and pride in dreaming up flavor combinations that are extremely appealing to cannabis enthusiasts. Through years of pheno-hunting and crossbreeding development, Tahoe Hydro says that it leads the way when it comes to advancing strain variety in the Nevada market.

Nevada, according to Schiavone, has become one of the more stable markets in the country with respect to cannabis distribution. “I think everybody underestimated the power of tourism in Nevada,” he told Disrupt, adding that the company expected its prices to go down.

“They have been steadily going up and are approximately 40% higher than all of our original projections when we entered the market. The approval of on-site consumption and this next round of licenses will also increase demand. When the state doubles the amount of stores and adds smoking lounges, it will take awhile for the supply to catch-up to the demand.”

In running, managing, and operating such large facilities, Schiavone shared his experience. “I think the biggest challenge, initially, is making sure you have the right engineers,” he elaborated.

“They all say the equipment meets the needs we have, but what they don’t understand is the impact plants have once they make it into the environment. If their calculations are wrong, you just spent millions or more dollars on an environment that is impossible to produce a product that can pass testing.”

Schiavone also revealed that many cultivators in Nevada have had to redesign the HVAC systems in their facilities.

A Cannabis Strain That is “LIT”

Yielding the highest quality genetics is what LITFarms biggest focus is, Schiavone, who is the creative mind behind all of the genetics of LitFarms started out as an international breeding and seed distributor, which has won multiple awards in various countries and continents over the years.

LIT, according to Schiavone, stands for “Lost In Translation,” a startup that was created to focus on connecting with the consumer and giving them a unique experience. The company has quickly become one of the most dominant breeders in cannabis, focusing heavily on the highest quality genetics.

The company recently launched its pre-roll line and LIT-branded flower in both California and Nevada, adding quite the “buzz” to the cannabis community. This year, the company has already won two awards for its Watermelon Mimosa, Mimosa x Watermelon Gelato, and Cherry Cheesecake strains at The Jack Herer Cup, which are crafted at the confluence of providing for a warm, lighthearted indica-dominant strain.

“It starts with the seed, like all plants. Marijuana starts as a seed. What looks like a pebble, is actually an entire plant conveniently stored with a few days supply of food to support itself. During germination, this food is converted into sugars that the plant uses to break through its shell and form its roots. From that point forward, the young seedling depends on its environment to provide the nutrients it will need to survive.”

The Reno-based company has a triple stacked LED facility, with 3-levels. Those at the company involved with the growth and cultivation, are required to use a lift to reach the third rack. “Growing weed is a very interesting perspective to see what it looks like, especially if you’re three-levels up,” Schiavone pointed out. “It’s a very technical process that requires highly sophisticated knowledge and experience.”

Its manufacturing facility is responsible for making concentrates, specifically controlling the terpene profile  “Our strains are a very high terpene type product, which gives it more of a taste. As the market is very THC-driven, we look at lowering the THC and raising the terpene quality for the taste.”

Those familiar with LIT as a brand, know its flower is packaged with eye-catching art, having recently launched their custom-branded unique types of flower and pre-roll lines in both California and Nevada, sending the cannabis community buzzing.

And of course, what cannabis enthusiast doesn’t enjoy some watermelon tinge to their high?

Keilley Lee Marques : An Entrepreneur with Dreams, Passion and Life