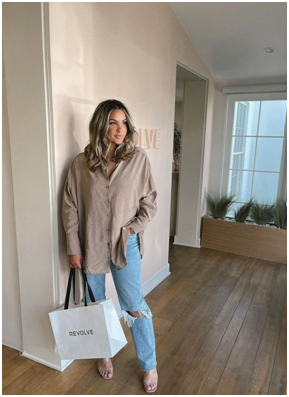 Full-time influencer and content creator Jaclyn Singletary Gibson is achieving goals and making dreams come true for herself and her family by pursuing a career that some dismiss as a fad or a craze.

But in fact, social influencing dates back to 1760. Josiah Wedgwood was a designer of high-quality pottery and one of his high-profile customers was Charlotte of Mecklenburg-Strelitz, Queen of Great Britain and of Ireland. He convinced the queen to allow him to call his pottery “Queen’s Ware” and implied that he was essentially the royal potter. His work became immensely popular as commoners were eager to use the same pottery as the queen. Due to this, Wedgwood is referred to as the “father of modern marketing” and to this day Wedgwood china and porcelain is highly sought-after.

Anyone who wants to dismiss influencers as a “trend” might want to double-check the history books. Throughout history social influencing has been a key marketing technique. Fashion lovers might recall how Coco Chanel rocked the fashion world in the 1920s with her iconic little black dress and pantsuit, changing the way women dressed. And what about Michael Jordan’s game-changing 1984 endorsement deal with Nike? It was the first of its kind and resulted in the Air Jordan sneaker and $70 million for Nike the first year of the collaboration.

Today, you don’t have to start out as a huge star like Michael Jordan. Jaclyn Gibson shares her own success story and how any everyday woman can turn her life around and do what she loves while achieving financial freedom.

“Influencing can and should be taken seriously,” Jaclyn says. “It can also be truly life-changing.” Creating and monetizing content and promoting brands involves dedication and sacrifice, but Jaclyn points out that anyone willing to put in the effort can succeed. “There is a lot of hard work that goes on behind the scenes,” she says. “It may look easy, but it’s not. There’s a lot that goes into it.”

Still, she states that anyone who is willing to invest their time and energy can achieve success. “Social selling is everything right now,” she says, “and it’s only growing. Brands have more funds available for promotion that most people can even imagine, and they’re willing to pay people just like you and me to use and promote their products.”

Jaclyn has gained a following of 250k+ on Instagram and 79k+ on TikTok, demonstrating that people gravitate toward her realness, openness, and willingness to be vulnerable about all aspects of her life. “Life always has its ups and downs,” she says. “This is why I strive for authenticity in all situations. I’m not afraid to tell my story and be real.”

Jaclyn Gibson is the daughter of Michael Singletary (aka Samurai Mike), an award-winning NFL football player and coach who played with the Chicago Bears and coached for the Baltimore Ravens, among others. Jaclyn is accustomed to seeing success as a result of hard work and dedication. As one of 7 children, she also grew up with a strong appreciation for family; she also grew up in faith, as Mike Singletary is an ordained minister.

She had a firm foundation and she knew from a young age that she wanted to work for herself and always put family first, and she had been taught the work ethic and family values to make those things happen.

After college she was a full-time wedding photographer, a background that provided the perfect backdrop to becoming a brand promoter and influencer. Good photographs are important because a picture really does speak a thousand words. “Brands want their products showcased in a favorable light,” she says. “Good pictures are important. I had an advantage in that I had training. But you don’t have to be a professional photographer; that’s just my particular background.”

After she got married, her husband worked a full-time 9-5 while she continued to pursue her photography business. The problem was that her weekends were booked with weddings, so she and her husband were facing a lot of time apart. “We started talking about having kids,” she says, “and the idea of my weekends being taken up with work, traveling to destinations, sitting at my computer editing – it wasn’t what I wanted. I started to think about alternate pursuits.”

Then life stepped in, as it often does. Jaclyn’s husband Seth got a job coaching a football league in Dallas, so they moved; but when the league folded, they had to face a choice. Seth was willing to return to San Diego to a job that made him miserable, but Jaclyn wasn’t okay with that.

“We had 13 weeks of unemployment,” she says. “I gave myself that much time to figure something out. I started reaching out to brands to offer promotion, sometimes hundreds a day. I would reach action limits on Instagram because they thought I was spam!” She began taking quality styled photos for absolutely nothing in exchange, and little by little, brands started to notice.

“First it was small brands,” she says, “and eventually bigger ones. I went from making $50 per post to thousands. Then I landed dream partnerships with brands like lululemon, Anthropologie, Pampers – my hard work was starting to pay off. I was able to stay home and be with my kids, pay off all of our debt, travel to places we wouldn’t have been able to afford a year ago, and save up for a home while my parents graciously took us in when we had very little.”

She says that the key components for content creators is knowing their own worth, being willing to learn, and being ready for hard work. “Be a student first,” she advises. “Learn how to take beautiful pictures, learn about the algorithm, learn about trends and how to navigate whatever platform you’re using, be it Instagram, TikTok, etc.”

She urges would-be-influencers to learn how to set themselves apart in a very saturated and often artificial platform. “And be willing to work,” she says. “A lot. For little and sometimes nothing in return. Have a vision and a goal in mind. What brands do you want to work with? What do you NEED financially? Network with people who can help you get there. Get brands’ eyes on you and make sure you’re setting yourself apart somehow!”

Jaclyn’s background as a wedding photographer absolutely explains the strong aesthetic appeal of her Instagram account. There is a striking sense of her artistic eye throughout her posts; the colors coordinate, favoring a trendy neutral palette with the occasional splash of color – cool green, warm orange.

But while the vibe is gorgeous, the posts are all about real life. “I try to be as open as possible,” she confesses. “I have vlogs on my YouTube channel that cover everything in my life. My TikTok account is like that, too. I just believe in truth.”

Jaclyn offers humor, the challenges of being a parent, even fashion advice and style inspiration for the everyday woman. She has gained a large following for being someone who says what we’re all thinking: “I talk about things that not everyone loves to discuss but that we’re all going through,” she says.

For example, she strives to provide healthy, natural, home-cooked meals for her family. Organic and vegan options are often at the top of her shopping list. But she also isn’t afraid to post a video in her car enjoying a rare splurge from Chick-fil-A. “I got a Diet Coke,” she admits, rolling her eyes, “which I know, it’s so bad.”

Her dream was always to work for herself – and she has achieved that. Now she wants to move forward by continuing to offer warm, funny, genuine content, as well as teach like-minded women how to utilize the vast power of social media to achieve their dreams.

Step 3: Be Willing to Work!

The short answer to her success, Jaclyn says, is that she worked her tail off for very little in return. But she had a vision in mind. She knew what was possible if she just put in the effort. She’s had days where she sent hundreds of emails; and she’s had days where she was able to just relax and let her previous effort do the work for her.

Starting out, she reminds would-be influencers, you have to be willing to work for little or nothing in return. You have to get your name out there and build a reputation.

About the future of the world of influencing, Jaclyn says, “It’s definitely not slowing down! Social marketing is a multi-billion-dollar industry, and it continues to grow. Brands are not afraid to pay you if it means more eyes on their business.”