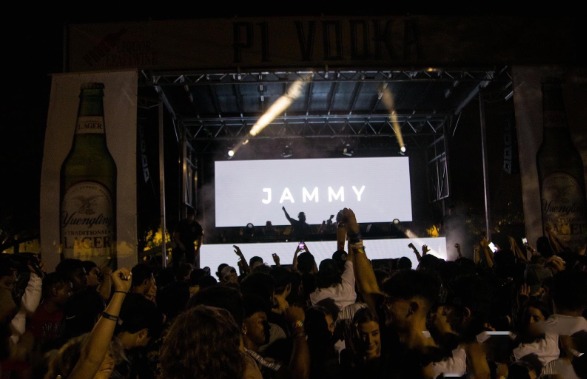 Five years ago, Jamaal Wallace uncovered a talent that had yet to be acknowledged when he was asked to stand in for a DJ at the well renowned Orlando college bar, Knight Library. With amateur prior experience and some apprehension, Wallace exceeded the expectations of his colleagues and the crowd as he performed set after set with energy that many described as contagious. One year later, Wallace acquired residence as the DJ that we now know as Jammy.

“The first night I performed it almost felt like a joke at first. My manager asked me to step in because he knew I could improvise and that I’d seen enough to do the job competently. The decision was solely dependent on my ability to vibe with crowds, so I stepped in and did what I knew I could. When I started getting into the sets, I realized that I could incorporate my love for music and creating a fun environment for people to let go and enjoy themselves as a DJ. It felt like I was home, and I knew my future there,” said Jammy.

According to his colleagues, Jammy had always had an undeniably fun and enlivening presence. With his musical talents and fun persona combined, Jammy moved from venue to venue in Orlando, Florida with consecutively sold out shows from the very start of his career.

“I remember listening to some of his sets when he only had a few months under his belt and being so impressed with the raw talent. The way he blended his songs and had the crowd jumping every time I looked was like nothing I’d ever seen before. His creativity is off the charts, and it shows every night he throws it down in Orlando, – said Chris Pavlos

“I have listened to Jammy’s sets for 3 years now and every set continues to get better and better since he always feels out the crowd and makes it a unique experience. He turned me and many of my friends into house fans, and helped us fall in love with many different types of music. Whenever I am out with friends who have heard one of Jammy’s sets, we all always agree that we wish Jammy was here DJing instead of the DJ who was playing.”- said Holli Meinel

The progression of Jammy’s DJ career mirrors the transparency that can be described in his open format sets. Since his record turnouts at The Attic in downtown Orlando at the start of his career, Jammy has evolved into a DJ that is known for his ability to play to a crowd, rather than for a crowd.

“With every set I surprise myself. Most of my experience has been with house and EDM music because I saw the most positive reaction in the venues with those genres, but I love to change it up depending on the crowd’s vibe. I’ll always make an effort to be vocal with them and make them feel like I’m down there partying with them too. I’ll even stop in the middle of a set to shotgun a High Noon with them and love every minute of it. Creating a fun environment is always going to be the most important thing for me, and I think ultimately that’s all people really want too,” said Jammy.

When describing their experiences of watching Jammy perform, fans exhibit an undeniable adoration for the DJ, with frequent mentions of the personable style that sets him apart from the mundane.

“Hearing and watching Jammy’s sets are one of the best parts of my week. Anyone can get up on stage and play their mixes but Jammy brings energy. Not only do his sets light up the room, but his presence brings everything and everyone together. Jammy has pure talent and passion for what he does and it shows every time he performs,”– said Sky Turner.

“Jammy just knows how to work the crowd, everyone always looks forward to his sets. If it’s a packed Friday night and everyone’s hyped, you know already know who’s in the booth,”- said Brooke Victory

Jammy’s fan base after just four years of holding residence as a DJ could be seen as colossal in comparison to other’s progression in the profession. While bar hopping through the city of Orlando, fans and friends of the DJ can commonly be seen rocking “Jammy” shirts. Since the DJ began selling merchandise, the clothing line has been consecutively sold out with products on backorder. Jammy merchandise and its popularity is just one testament to the DJ’s skyrocketing success, as well as an attribute to the passion and support his fans consistently show for him.

“I treasure my Jammy shirt and wear it as often as possible because I love nothing more than to represent for such an amazing and talented human. His sets truly inspire people to have a good time, his vibes are just different and superior. When he’s playing, everyone always leaves in a happier mood with new friends and new memories, and wearing my shirt brings me back all that warm nostalgia.” – said Maddie Grunshoff.

In his most recent set “JAMMY GO HOUSE HOUSE VOLUME 3” you can hear the evolution of his musical talent with what he describes as mixture of genre’s and his own hype energy. As the third set in his trilogy “JAMMY GO HOUSE HOUSE,” volume three has been deemed a crowd favorite by fans and Jammy himself.

“Jammy doesn’t just set the energy in the room, he IS the energy and everyone who knows him knows that. Listening to ‘HOUSE HOUSE VOLUME 3,’ you can hear and feel that hype Jammy energy you won’t find with any other music or DJ.” – said Sarah O’Mahony.

As a public figure, Jammy is known for his electrifying energy and talent. However, when asked what message he would choose to convey to the public and those who wish to follow in his footsteps, he chose to emphasize the importance of being genuine to others above all.

“When I felt hesitant to pursue my career as a DJ, I was so fortunate to have so many friends that encouraged me to put any doubt behind me, and follow my dream no matter what it took. They told me this because they knew I would have, and always did do the same for them. No matter what your dream is, having people there who genuinely support you simply because you’ve been genuine to them will always be the biggest game changer,” said Jammy.

The truth in his message can be seen and felt when reading the words of his long-time friends and colleagues, who frequently praise his work ethic and genuine character, in addition to his talent.

“I have known and watched Jamaal since day one and going back a decade now- to see the growth in everything he’s done and worked for, especially DJing, shows his desire to be great. Every set, every time he’s playing it’ always top notch with the intention to be the best regardless of the day, time or location. It’s exciting to think about how successful he will be, because he truly deserves it,”- said Jesse Sobel

“There aren’t enough words how to describe how incredible he is. Anytime I go to one of his sets I know I’m going to have a crazy night…or day! During his sets, Jammy doesn’t just mix up good songs, he feels the crowd and knows exactly all the right songs to play. His connection with his audience is contagious and one of a kind. Off the tables, he’s an absolute beauty of a person. He is undoubtedly of the most down to earth and genuine guys I’ve met. I feel blessed to have been able to witness his journey from his early days and look forward to keeping up with his bright future that he has ahead of him. If you don’t know who Jammy is, you need to do yourself a favor and go see a show, you won’t regret it!” – said Ty Achotegui

With great character, confidence and projections of a bright future ahead, Jammy plans to take his talents to a national level in the upcoming months.

“For now, I have tours set to perform in Atlanta and a few other major cities on the East Coast. I’m taking it day by day, but I know I have something the whole world needs to see and experience and I’m going to do whatever it takes to make that happen. This is only the beginning,” said Jammy.

As a token of his gratitude, Jammy would like to give a shout-out to his sponsors, Red Bull, Villon, and Godfather Pawn for helping him achieve the success he has today.

To inquire about booking Jammy as a DJ at your venue, e-mail Jammywallace9@gmail.com

To see what all the hype is about, follow Jammy on Instagram to keep up with his schedule by clicking here.