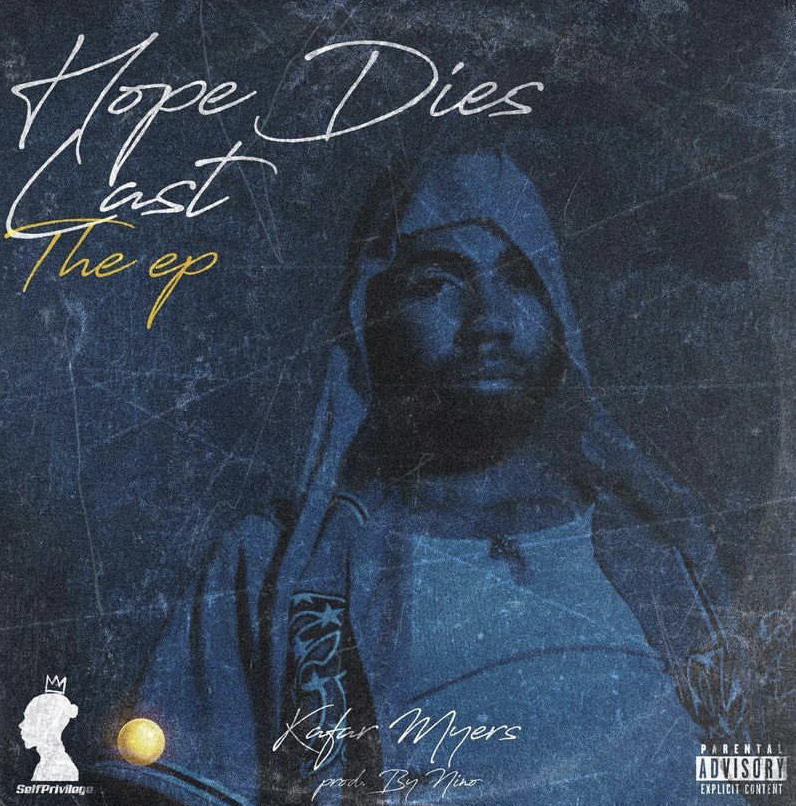 When it comes to hip-hop music, listeners depend on artists to come through speaking truth and realness along with possessing a sound that sets the tone to whatever mood they’re in. You can say that rising artist, Kafar Myers understands the assignment each time he drops new music. Adding his own perspective on life and having a sound that is undoubtedly unique, the PA- based rapper, originally from NJ, adds his own poetic touch to modern day hip-hop, while keeping its true authenticity intact. It’s all about creating tracks that listeners can relate to and addictive vibes that make listeners come back for more.

In his latest EP, “Hope Dies Last”, Kafar Myers puts together a catalog of tracks that he knows his listeners are going to relate to. Ever since starting his career as a hip-hop artist, Kafar Myers has been known for sharing his life experiences and perspective with the world through his music. In the 8-track EP, Kafar shows his growth as a lyricist by successfully creating songs that are lyrically powerful, speaking volumes on life and the fact that being your authentic, true self is where it’s at. Making an impact per usual, his track record doesn’t lie. He’s already reached over 20,000 streams in the past with his last project, “Self Privilege” because of his poetic lyricism and catchy sound and it’s more than likely that this new project will do the same or even better. His featured song off the EP, “6 Below ” has already been in rotation by Phiily’s own producer, Othello via Twitch.

It’s all about having confidence in how he lives his life and that’s what he’s trying to feed to the world. Kafar believes that if you manifest the highest version of yourself, that person will help solve your problems in your current situation. Seeing others be unmotivated or crippled in fear is what makes him speak the way he does. There are no “what if” moments because he chooses to live life to the fullest. In his personal life, he emphasizes being true to who you are. Kafar is a man with many hats. Aside from being a rap artist, he is an entrepreneur and published author. He makes it a lifestyle to always be the best version of himself and only wishes that for his audience.

Being a poet at heart, Kafar Myers is a published author of two books that has sold 300+ copies nationally. Although he is a titled poet, don’t let that fool you with his music. What sets him apart from the rest is the ability to use his words and along with developing a sound listeners can listen to and appreciate. “Hope Dies Last” is a representation of situations that have shaped him to what he is today. He is always telling a story in his songs.

The EP begins with his featured track, “6 Below”, a song he’s written to express how precious life can be and how the rap game could be a cold place. The track is a more passionate side to the hustle and introduces the project with a more real side to what he experiences as an rap artist. The entire project is set to release this January 2022, starting the year strong for Kafar.

You can listen to “Hope Dies Last” on all streaming platforms now!

CEO Guides 1,000,000 Black Women On A Journey Towards Mental Wellness and Financial Freedom, A Founder’s Story with Yassin Hall

Next Potential NFT to Explode: The Noble Wolf Pack NFT