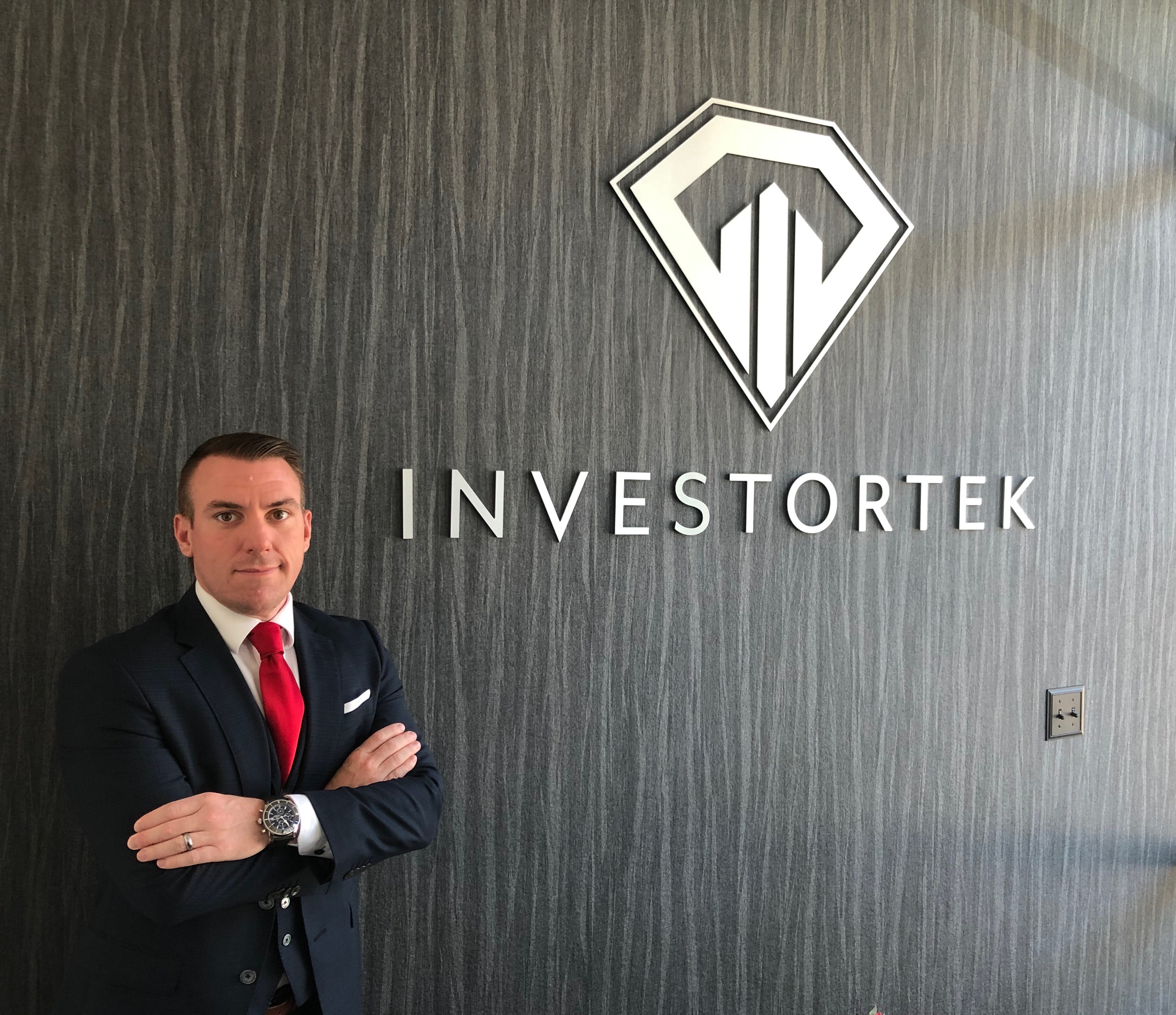 Kyle Mallien is the first to admit that he has reached an interesting point in his life. The California-based serial entrepreneur has amassed much experience and wealth since his start in the world of big business. He’s doing the disruptive thing by giving much of it back — the money and the advice.

Mallien has over a decade of experience creating, scaling, and selling companies. Currently, his portfolio consists of nine diverse streams of revenue — everything from office phone and telecom refurbishment and an industrial baking company to a CBD whitelabel production facility and property management and robust real estate portfolio. This eclectic mix of investments represents Mallien’s wide range of business experiences and interests, but all have one thing in common — a clearly defined idea, an exceptional product or service, a niche, yet loyal target audience.

They’re also what Mallien calls “bridgeable” investments. “My knack for business has always been finding a crack between two lucrative, linkable endeavors — and being the one to bridge them,” he says.” It’s this ability — visualizing the need and filling it — that he feels will make him a strong contender in business for the long haul.

It’s also the reason why Mallien’s Facebook page is full of comments from friends, investment partners, and hopeful business owners — asking for advice and nodding along virtually with his no-nonsense entrepreneurial approach. He’s building an empire, and many of the people he mentors want to be tall enough for the ride he’s on.

His approach to business — and life — is simple. “Being rich is something in your mind — not in your wallet,” he says. “I’m all about doing the right things when no one is looking — that’s where the abundance is.”

It’s an abundance that he’s happy he decided to not miss out on. He almost made a different choice.

Mallien’s story begins in a low-income, rural area in Northeast Wisconsin. “I grew up in a place that was known as one of the most popular tourism destinations in the state,” he says. “A beautiful spot, but there was still a fair amount of families trying to make ends meet.” He and his brother were raised by two loving parents who earned a modest income, and life was stable — until Mallien’s father was diagnosed with brain cancer when he was 14. He fought the disease for 36 months, passing away when Mallien was 17.

“I dealt with my Dad’s death by getting heavy into alcohol and drugs,” Mallien says. “That led to some run-ins with law enforcement, and a lot of questionable decisions.” Lacking any direction or gumption to have a career, he attended community college in a city several hours away and took the job that would shape his future career trajectory — and his life: working in a local call center for a mortgage company.

“This was in 2001. The housing market was awesome, and mortgages were on fire,” Mallien recalls. “Everyone was winning. If you had a 580 credit score, a W-2, and a pulse, I could probably help you get a mortgage.” He transitioned from call center to loan officer to senior loan officer, riding high with a six-figure income at the age of 21, he continued to party and enjoy his wealth — something he never had access to as a kid.

Then, 2008 called. Like it did for so many people, it demanded everything back.

By this time, Mallien was married. He and his wife were expecting their first child. In a matter of weeks, he lost his home, vehicles, and all of his savings. In addition, he had lost his mortgage license on a technicality with the state, so he couldn’t practice even if the market hadn’t crashed. He started to reinvent himself by trading stocks, but he admits he was living on borrowed time and borrowed money. “I was still drinking heavily by that point, and I wasn’t dealing with my situation — honestly, I hadn’t really even dealt with my father’s death,” he says. “I didn’t want to own what was happening to me.” Humiliated by his failure, especially as someone who had been a pillar of strength for his family and friends — he attempted to take his own life.

The attempt failed — something Mallien attributes to divine intervention. He quit drinking — “it was something I knew I needed to do if I was going to live a successful, fulfilling life” — and started to rebuild his life. “My friends and family had distanced themselves from me, and I had nowhere to go but up.” He started rebuilding with a nonprofit endeavor in Madison, Wisconsin and was soon courted by a California company with a similar premise. Seeing an opportunity to do right and make up for his burned bridges, he invested his time and money wholeheartedly into the company, eager to see the benefits of his hard work.

The offer turned out to be a scam, and he found himself thousands of miles away from home, with investors breathing down his neck — expecting returns from a deal that evaporated before his eyes. This time, he was ready to think differently. “I told myself that I had been in worse situations, and I was not going to get knocked down again.”

He quickly pivoted into another money-making opportunity: electronics recycling. “Electronics were being mass-produced so quickly that in a year, you were using an out-of-date product,” Mallien says. “Many people in the market were making money selling the older models of these products for scrap prices.” He recognized the commodity being wasted and approached these companies with an idea — he’d sell these valuable parts of these products at wholesale prices rather than the 35 cents a pound these companies were making treating everything as scrap, and he’d split the profits with the companies.

He was able to broker his first deal, and soon found himself bringing in $50,000 a month on eBay. That led to establishing multiple companies focused on processing parts specifically from Fortune 1000 companies. Companies like LG, Panasonic, Sony, Yahoo, and some of the largest tech firms in all of southern California entrusted Mr Malliens data security and recycling services. He scaled that operation to 1100 corporate clients in California in 30 months and achieved his first exit; another in the Houston,TX market within 18 months. He wasn’t just getting his footing back — he was on a steady climb.

The next step for Mallen was whittling his focus. “I kept thinking — rather than going after all of these commodities — and fighting with the other recyclers over the same Fortune 1000 customers, why not go after one commodity that I know better than anyone?” he says. He started working with an expert in telecom equipment, honed his market and streamlined his operations, and produced a concentrated stream of revenue. He was able to bridge the gap and turn all of his competitors into suppliers. Today, Mallien boasts one of the largest asset management, office phone refurbishment, and telecom distribution company in the county — one that after just four years of operation has secured #1465 fastest growing companies in the country in the recently published and highly coveted INC. 5000 Fastest Growing Companies.

When asked what it takes to run a successful business, Mallien says it’s all about mindset. “If you’re spending 20% of your time with your ideal customer, and the other 80% with your non-ideal customer, that’s not going to get you to where you want to be,” he says. “You have to find your perfect customer, ask them what they want, and then give it to them. Sounds easy, but it’s not — you need to be willing to look at your business from the opposite direction, and create a system that allows you to rely on it — rather than having all of that pressure on you,” he says. He cautions that this is most helpful for those who have already chiseled their identities and have been precise in narrowing their customer base.

“I’m not a big believer in competition,” Mallien says. “If you sell on price, it’s always a race to the bottom and who will do it cheaper. I focus on value creation and creating leverable relational capital. I’m confident with that mindset,  I’ll always have an edge on the market — and that companies I invest in will always have an edge. If they don’t or I cant add distinguishable value, I usually don’t invest in them.” He’s also a firm believer in what’s thought of as old-school business policies. “I will always pick up my phone. I will always be available. I will always do the right thing for my business and my customer, and that’s largely based on my moral compass.” he says.

“I’m 100% truthful, all the time, no matter what the situation. If you wake me up at 2 o’clock in the morning and ask me a question when I’m groggy and half-asleep, it’s going to be the same answer at 10 o’clock in the morning, if we’re sitting down having coffee and I’m sharp.” It’s these values, and a commitment to the rugged and original style of business building that’s served him so well, and it’s a lesson learned during the lowest point of his journey.

Coming back from massive debt and a self-proclaimed dead-end, destructive life, Mallien is proud of what he’s built — and he’s committed to helping people who have found themselves on a similar path. “When you find the right person who really sees you, understanding the challenges you have, and says, ‘Hey, I see your business is at this level, and you’re probably dealing with these kinds of situations — I can help you with this’ — that’s incredibly meaningful. “It’s so rewarding to be a guiding light for people who are just trying to make it, trying to take care of their families, their employees. That’s what it’s all about — coming from a place of service, so all of us can crush it.”

This entrepreneur and mentor is only going one way — up. And he’s planning to take hundreds of thousands of prospective success stories with him on the way. If you’d like to learn more from and about Kyle, you can read his book, Create Unlimited Customers or follow him on Instagram.

Related Topics:Kyle Mallien
Up Next

Coach Lucia G. Onieva on How to Implement The Five Key Habits To Success