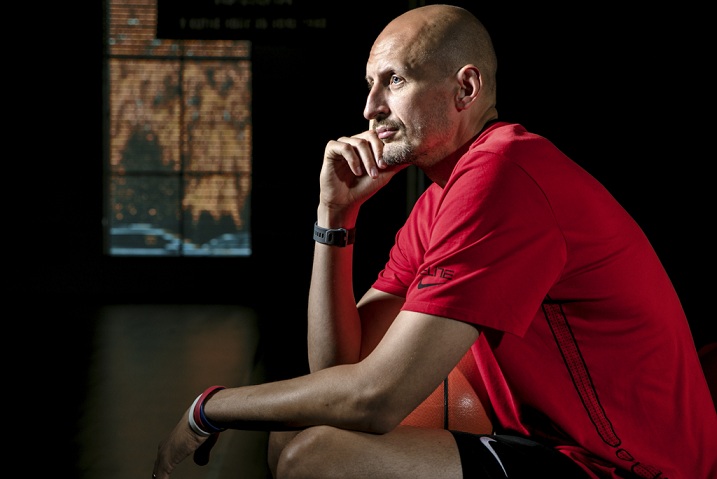 When you have a career like LUBOS it’s hard to know from where to start, but Like always we will start from his early beginnings.

In Summer 1992, Barcelona Olympics, American Dream team. That was the moment when he feel in love with basketball.

“It was as if someone from Mars had suddenly come to Play.” He got into basketball when he was 7 years old. Under the leadership of coach MIROSLAV POTMĚŠIL,he developed rapidly in the youth teams in ČESKÁ LÍPA and was also included in t he U17 and U19 national teams. At the age of 17, due to faster player growth, he moved to the first-LEAGUE BK DĚČÍN.

Barton possessed a long wingspan and physical attributes from his parents who were also good athletes. With these good physical parameters, a jump strength it was easy to predict that he is going to be a very good professional athlete. After high school, he went to study and play basketball in the USA. He was four-year started at  VALPARAISO university, and helped the team make NCAA TOURNAMENT THREE TIMES during his there. He was the leagues MVP in his final senior year in 2002. He put his name in the NBA draft and unlike his CZECH PEER JIRI WELSCH, he was not selected. Even though he put up a quite good impression in the NBA summer league that year, Barton preferred to come back to Europe and signed with Italian powerhouse FORTITUDO BOLOGNA.

In the following years, he played in clubs in ITALY (FORTITUDO BOLOGNA, VIRTUSROMA), SPAIN (JOVENTUT BADALONA, FCBARCELONA, FUENLABRADA AND VALENCIA). His most successful years were in Spain where he took many titles with JOVENTUT and with Barcelona teams. Impressive 5-year run was capped with Euro League title in 2010. After returning to the CZECH REPUBLIC, he played briefly for USK PRAGUE, and in the summer of 2014, he transferred to the ČEZBASKETBALL NYMBURK team. At the end of 2015, he took advantage of the offer of the Barcelona club, where he played in the Reserve team. Besides obvious playing, his duty was to mentor young players and prepared himself for a coaching career.

HE began his career as a coach at EuroProbasket, leading the EuroProBasket team as a head coach. After two months with EuroProBaseket, He was offered a position as assistant coach of the FC Barcelona Cadet Team. He saw a unique chance to “Fix” someone at his young age from a basketball and human point of view. Thanks to his rich career, he has a clear idea of how basketball should be played and that’s what he demands from his players. He served 3 years in the FB Barcelona Youth Categories.

His specialty has been working with the big guys, as well as mentoring the young star players. In that season, Barton took his Cadet team to the final game of the Spanish Championship, where he lost by two points to the other Spanish Powerhouse Real Madrid.

During that time, since 2017, Barton has been also working with the CZECH BASKETBALL ASSOCIATION. First, he joined the senior National Team for The EURO CHAMPIONSHIP IN 2017, then shortly after he was named the head coach of the CZECH REPUBLIC U18 NATIONAL TEAM IN 2018, and the team to advance to division “A” in 2019. In 2020, it was his 4th year, leading the group of players born in 2003 and 2004.

In the EURO LEAGUE BASKETBALL ADIDAS NEXT GENERATION TOURNAMENT ISTANBUL,coach Barton led in Basket BRNO for its first victory in ANGT HISTORY as it knocked off U18 to FAS BURSA 71-66 in overtime to finish seventh in Istanbul.

To put a extra plus in his career, Lubos have won another ticket to The Euro League Basketball Adidas Next Generation Tournament enters its 20th Edition this season. He brings basket BRNO another year with more experience.

We can talk days about Lubos Barton’s interesting basketball career, but one things is sure, he was an amazing player on the right track to becoming an Even better coach, teaching young players important things in life and basketball.

This Young Realtor Is Taking Over The Ontario Real Estate Market