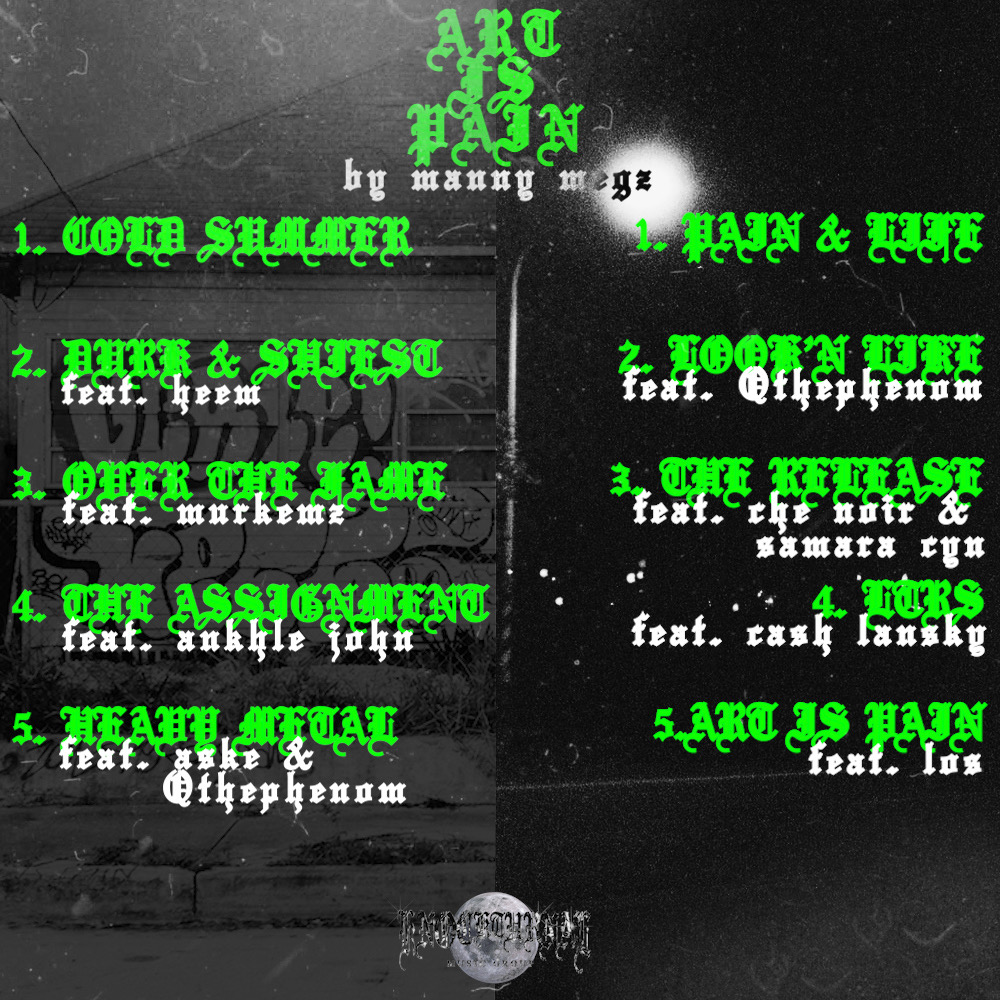 A new producer by the name of “Manny Megz” has recently hit big strides in the game by dropping songs with Ghostface Killah, Westside Gunn, Conway the Machine and many more. He took to social media last night with a post saying “July 22nd #artispain “. This album has a few underground rappers that are pretty well known in the seen such as Heem from B$F, Ankhle John & Che Noir. Arizona/New York Artist “Murkemz” is also featured on this album along with other Arizona artists like Aske, Samara Cyn, Cash Lansky & QThePhenom. A good balance between the east & west coast. Manny is set to release his single for the album “The Assignment” tonight with AnkhleJohn. Taking a full deep dive into Manny’s catalog, he seems to have a very particular ear. A lot of his production is very dusty and grimey. After speaking with Manny, this album will be no different. But… Manny spoke on it being a split album. One half being very Dark and the other half being more lofi based. This will be very interesting to hear. Based off of his last few projects he seems to have taken on the darker sound as his signature sound. Even his aesthetic is very dark. I got the chance to speak with Manny about his roll out Strategy. After speaking with Megz, he seems to be an extremely calculated individual. He’s always been roll out focused, when I asked why the rollout does not seem so intense this time around he responded with “ The rollout has been happening since I got it tattooed on my neck, it may not seem intense because I stretched it out for so long but it’s been happening for a long time and people have been waiting for this project for months. If you look at the date on YouTube of when I posted the “Let the real sing” video, it’s been prepared for months before I made it public. A big part of this roll out was just working with Hus, Gunn, Conway, Lupe and the other artists separately from this album. This gave me the opportunity to gain more fans and make this project kind of like my first official project with the worlds eyes on me. Just know everything I do, I planned it months before I did it. My track list post? That was planned 3 months ago that I was going to post it on that day at that exact time.” This man is definitely on a different level. I am really looking forward to seeing what Manny Megz has to offer with Art is Pain.

Your Ease Of Pre-Approval With Sofia Badruddin