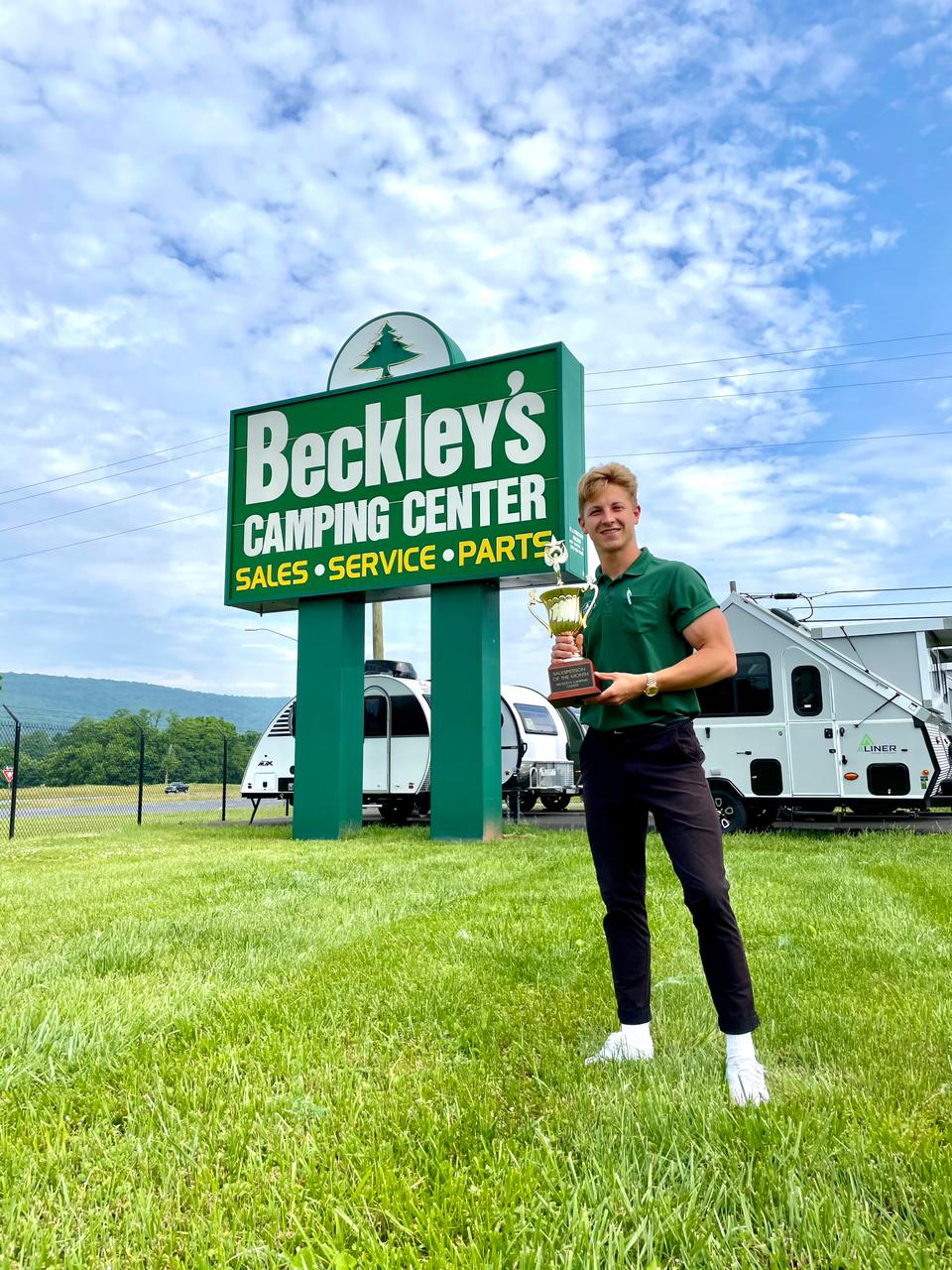 Justin Shanholtzer is a Professional RV Salesperson who helps people find a motorhome, travel trailer, or van conversion best for their lifestyle. Justin works with Maryland’s #1 RV Dealership, Beckley’s RV’s, to offer a selection of 500 new and pre-owned RV’s. Recognized as one of the best RV salespeople in the country at just 23 years old, Justin has assisted thousands of people select the right RV for themselves and their families.

How Did Justin Start at Beckley’s RV’s?

Justin’s father, Kelly, is the owner of Beckley’s RV’s. Growing up, Justin was always hanging around the dealership. His high energy was a lot to handle at a young age, but the Beckley’s employees always kept him busy as he ran around the dealership disrupting each department with his never-ending curiosity.

At 15 years old, that curiosity stuck. Justin began working during the summer months as an internet sales assistant/ social media content creator. Like any other highschooler, work wasn’t his priority during this time, instead his focus was directed towards sports and friends. It wasn’t until Justin was about to graduate highschool that he got serious about his future path. He planned to attend a 4 year university like Towson or University of Maryland, but quickly realized he didn’t have the credits nor SAT scores to qualify. Instead of pursuing his initial vision, he decided to jump straight into the family business and learn all that he could.

After Justin’s highschool graduation, he was offered a full-time RV sales position.

“I had a lot of eyes on me when starting both from co-workers, but also the management team. I never wanted to be viewed as the owner’s son, because that often comes with a negative connotation, and I just wasn’t raised that way, so I put my head down, and got to work.”

Justin was always naturally competitive while growing up as he played a variety of sports and always led as a team captain. Sales was a great position for him, because it gave him complete control of his schedule, with an unlimited opportunity to produce as much as he put into it, but like anyone starting out, he had a lot to learn.

It took him a couple years to figure everything out.. Justin said, “he made a lot of mistakes” in those early years, but understood “it was a-part of his growth and that he had to get down the fundamentals first.” In 2018, he started picking up some traction and became a top 5 producer at the dealership. In 2019, Justin really started to see some changes.

“My father told me when I first started, that he expected me to be the #1 salesperson at the dealership by 21 years old. 2019 was my last year to accomplish that. I couldn’t let down my father nor myself on that commitment, so I got ultra focused. I stopped doing what other kids my age were doing. People would ask me to go do this or that, and my response was always no, I have business to handle. I got committed and  I guess it worked out alright.”

At the end of 2019, Justin was recognized as the top producing salesperson at Beckley’s RV’s out of 25 salespeople. Then again in 2020, but this time setting a dealership sales record for the most company revenue generated in a year by a salesperson.

Currently in 2021, Justin is on track to break last year’s record.

“People see all the success each month, and each year, but they don’t recognize all the hours, effort, dedication, and commitment put into this. I mean I literally eat, breath, and sleep my business. I don’t have much of a social life outside of it, but it’s what’s required in order to achieve the levels of success I’m seeking. To some people it’s just a job, but to me- this is my legacy, and I’m going to continue pushing myself to the next level wherever that may take me.”

Success Starts with you First

Justin gives utmost importance to self-care. Right out of highschool, Justin became obsessed with personal development and fitness. He immersed himself with endless books on health, fitness, sales, business, psychology, etc. He began working out, and eating natural, unprocessed foods. On instagram you will regularly see his stories captioned “ healthy” with a photo of delicious organic food  he’s prepared for himself. You can see those here Instagram

He states, “I try to treat myself similarly to a professional athlete. Athletes need to eat well, workout, and feed their minds with positivity in order to play at peak performance. Business is no different. I’m a firm believer that if you take care of yourself first, everything else will follow.”

Justin plans to continue moving up in the ranks at Beckley’s RVs while actively pursuing another business he’s been silently working on. He hopes to continue inspiring others by showing them anything is possible when you get ultra-focused.

Check out his website to book an appointment or get your RV questions answered. There, he also publishes useful information about RVs, explaining the features and functionalities of various models, by means of both textual as well as video content.

Are some coins better for gambling than others?