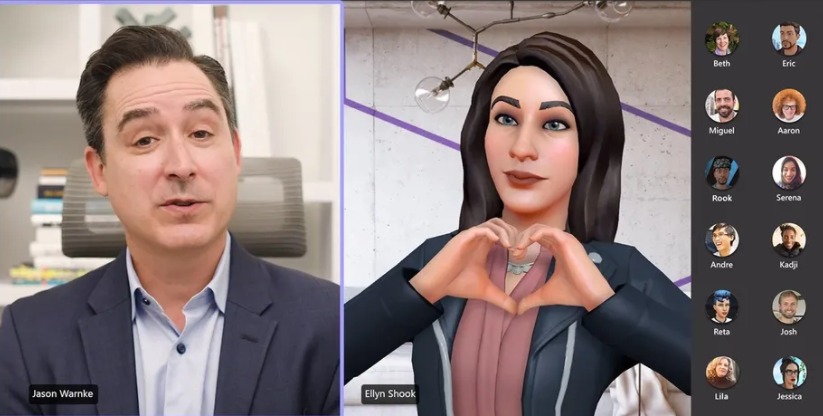 Microsoft Mesh has always led as the future of Microsoft Teams meetings. However, Meta, the newly launched Facebook company, is up for a challenge.  Meta is currently working on a similar concept inspired by a digital avatar representing you in virtual spaces. This has triggered Microsoft to push for a metaverse inside Teams.

Microsoft plans on introducing Mesh that will allow exploring virtual meetings. Animated avatars have been their excellent source of knowledge to collaborate HaloLens work, physical arrangements, and video calls where anyone can be part of.

Covid 19 came along with its pros and cons. Many lost jobs while others went out of their shells and became innovative. People were forced to work from home and adjust to hybrid positions. Microsoft was deep in researching new workable ways like Together Mode of making meetings more interactive and engaging.  Microsoft successfully used virtual space to onboard recruitment during the pandemic.

We all know how easily one can lose focus after the first 30 minutes in a meeting, not to mention the fatigue of a virtual meeting. However, Together Mode came to your rescue for the initial meeting fatigue and Microsoft Mesh anticipates to curb your low productivity generating from cognitive overload on all-day-long video calls.

Technology will soon spoon-feed us on whatever task we have. Microsoft Teams is venturing into 3 dimensional avatars in a push to a metaverse environment where virtual reality headsets will be pointless. The new 3 dimensional  Avatars technology is capable of representing you in both 2 dimensional and 3 dimensional meetings. You will have the option to either turn on your webcam or have a customized animated version of yourself represent you. The best part of it is that, with Microsoft Mesh, vocal cues are interpreted to animate the avatar.

Artificial Intelligence will be imperative in the case of listening to the vocal cues and animating your specific avatar. In 3 dimensional meetings, the avatars will be able to raise their hand on your behalf and interpret any selected emoji. Microsoft Mesh will be widely used in immersive spaces, especially to create a metaverse for businesses. Microsoft Mesh anticipates using the immersive spaces as a platform to network, socialize and undertake projects.

With the help of animated avatar works, the virtual reality and augmented reality headsets are open to anyone across multiple devices. Microsoft Mesh will also take care of all human experiences, including the feeling of presence, talking to someone, making eye contact, and responding to issues.  The language barrier will no longer be a challenge in the virtual team spaces with the help of translation and transcription support.

Microsoft has spent the last decade heavily investing in HoloLens work and its acquisition of Altspace virtual reality. Meta is not the only company anticipating the use of spatial platforms to offer virtual spaces for events, meetings, networking, and socializing opportunities. Meta and Microsoft will undoubtedly compete heavily in the metaverse sphere.

What is 4D Technology and How Will it Affect the Entertainment Industry?