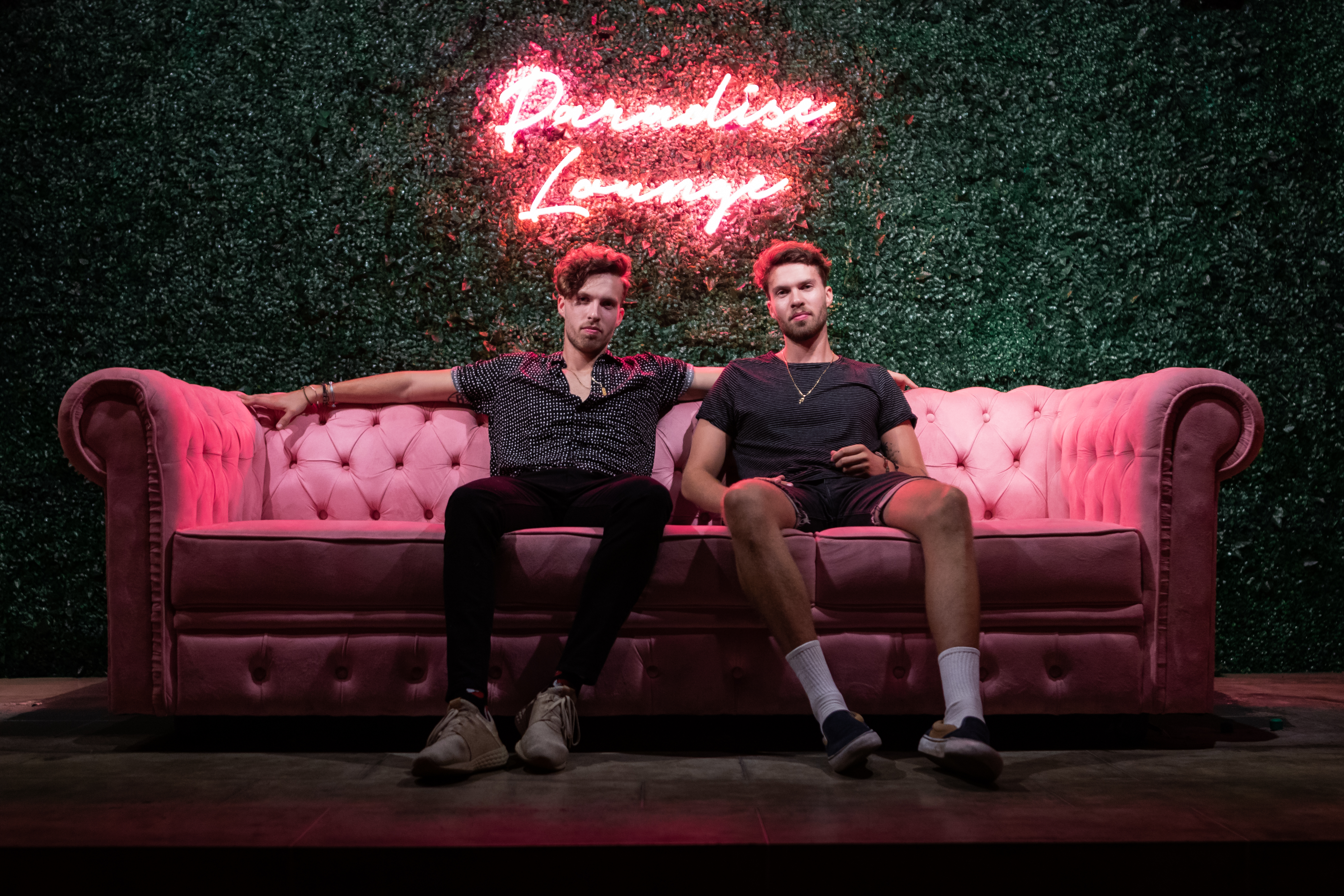 Rasmus and Christian Mikkelsen never thought they’d be sitting atop a virtual empire that they built from the ground-up. In just a few short years, the Mikkelsen Twins went from directionless high school graduates with nowhere to go to incredibly successful self-made millionaire entrepreneurs.

“If people from my high school were to see where we are right now, no one would believe it,” said Rasmus. “No exaggeration; we were the most invisible and insignificant kids through high school.”

Back in high school, nobody would’ve expected the Mikkelsen Twins to do much of anything significant in life. Admittedly, neither had a sliver of ambition and spent most of their free time playing video games or watching YouTube videos.

“We were never overachievers as kids, or achievers at all for that matter,” said Christian. “We would do the bare minimum to get by, and that’s it, nothing more.”

However, things started changing by the time they hit their twenties. The Mikkelsen Twins shared a small one-bedroom apartment in Aarhus, Denmark. They worked three days a week, unloading shipping containers. (Any more days of work would’ve been too much for them.) They spent the rest of their time skipping Danish classes, watching Netflix, and smoking pot.

It wasn’t until one night when Rasmus was lying in bed, staring at the ceiling, and asked himself, “If I died, would anyone even notice I was gone?”

Then, the Twins had a quick discussion. What were they doing with their lives? Were they going to live like this for the rest of their existence?

“That reflection together was kind of the turning point,” said Christian. “We just both admitted how pathetic our own behavior was and that we needed to change.”

Time for a Change

The Twins called their parents and told them they’d do whatever it takes to be successful. They promised to enroll in community college and graduate with straight A’s.

“They didn’t believe us at all,” said Rasmus. “And who can blame them? We were bums, after all. But we set a promise for ourselves, and we were going to keep it.”

The Twins worked harder during those next 1.5 years than they ever had before in their lives. They spent so much time studying and working that they hardly had any free time during the week. Yet, they never felt better. They were getting straight A’s across all their classes, a feat that surprised even them.

But they ran into another roadblock at age 21: they didn’t know what the point of all this work was.

What did the future hold for the Twins? Would they go down the traditional route and work 40 hours a week in a corporate job, desperately trying to climb their way up the ladder?

“If that’s the life I am going to live the rest of my life, I truly do not want to live,” said Christian. “I’m not saying there is anything wrong with that, but it’s just not for us. We could never be happy like that.”

Was that what was waiting for them in the future? Work super hard through college only to work even harder through adulthood? Do that for forty years until retirement?

“When we envisioned that, we felt so much pain that there was literally no way we would ever settle for that,” said Christian. “It was out of the question in every way. When you feel that strongly about achieving your goals, it becomes a guarantee to happen. Because we literally wouldn’t stop until it happened.”

It was time to try something else.

Despite all the success they’d built up, the Twins decided it was best to drop out of college. (Of course, they didn’t tell their parents.)

After all, their reason for getting straight A’s wasn’t to put on their resume or to show off their GPA – it was to prove to themselves that it was possible.

If it was possible to get a 4.0, what else could they achieve?

So they decided to start an online business.

The Twins had dabbled in the business world during their free time in college. Now it was time to put such skills to the test.

Since there were two of them, they could test out individual business models twice as fast. Each twin would try a business model, and they’d go with whichever one was more successful. The Mikkelsen Twins tried just about everything: drop shipping, retail arbitrage, Amazon FBA, Merch by Amazon, creating an app, and so forth. Some were complete failures, and others were small wins.

However, one model completely blew the others out of the water: self-publishing books.

The model is simple: conduct market research to find a non-fiction topic where demand is higher than supply. Create an outline based on competitor analysis and research. Then, write the book yourself or hand it off to a ghostwriter. Then, hire a designer to design your cover and format the book.

Once that process is complete, you can now sell your book in the world’s largest bookstore: Amazon.

“Amazon’s incredible print-on-demand system allows you to publish a print version of your book,” said Rasmus, “When anyone buys it, Amazon will print the book and ship it to the customer without you having to lift a finger. It all happens on its own. Any customer support, delivery, or printing issues are handled entirely by Amazon. And because it’s print-on-demand, they never run out of stock.”

The Mikkelsen Twins both wrote their first books themselves since they were broke. Rasmus from about CrossFit workouts and Christian wrote about how to become a 4.0 student. The Twins chose topics they were very knowledgeable in, so the writing process took less than a week.

Perhaps the one thing which surprised the Mikkelsen Twins the most was how passive their business was.

“Honestly, I HATE the term ‘passive income’. It’s because people assume you don’t have to do anything,” said Christian.

According to the Mikkelsens, there’s nothing passive in the beginning. You have to be dedicated to conducting research, writing your outline, proofreading, launching your book, and finding reviewers. It’s an exhaustive process that takes time but pays off in the end.

“Once you have launched some books and they’re ranking well on Amazon with enough 5-star reviews, then it truly does become passive. You can drop everything and stop working completely for two years and you will continue to generate income day in and day out via book royalties. You create something once, but sell it for years,” said Rasmus. “But It only becomes true passive income when you stop working on it. There was a ten-month span in 2018 where we did not spend a second working on our publishing business, but it still made us over $60,000 in that time.”

Now, the Mikkelsen Twins want to share their secrets with the world. They founded PublishingLife.com to teach others how to follow this winning business model to success.

The self-publishing business has brought success to the Mikkelsen Twins far more significant than they’d ever imagined. They’ve spent the past few years traveling and living in places such as Mexico, Bali, Croatia, Japan, Hawaii, and Spain.

“We just feel so lucky, blessed, and grateful for the opportunity we’ve been given, and we want to give the same opportunity to others,” said Christian. “The things people say to us and how publishing has changed their lives leaves me speechless and just happy that others get to have the same experience as us.”

The Mikkelsen Twins’ course isn’t just about following a winning business model, though – it’s about enabling people to live their best lives.

“The story behind the name ‘PublishingLife’ is that, while self-publishing is incredible, it’s not what we are most passionate about,” said Rasmus. “What we are passionate about is the Life that Publishing can create for you, which is a life of freedom, travel, or whatever else you love to do when you’re not working. Our focus is creating an incredible life for people, and publishing is just the vehicle we use to help people get there.”

Can Amazon Make You Millionaire Too?

If you have read the Mikkelsen Twins’ biography, you are probably wondering if you can also start earning a high income by selling on Amazon and walking the same path that the twins took to become successful.

The short answer to that question is yes! The Mikkelsen Twins are two of the many successful people who made it big through Amazon FBA Business. If you use the right strategy when entering the Amazon selling scene and put in enough time and effort, there is no doubt that you’ll be the next famous businessman on the cover of magazines.

The window of opportunity is still open. Business success didn’t change a lot, you still need strategy and plan to be a successful seller.

Years ago you could everything on Amazon quickly and successfully but now you need to find less competitive products and using marketing strategies like good product photography push it to page 1 of search results.