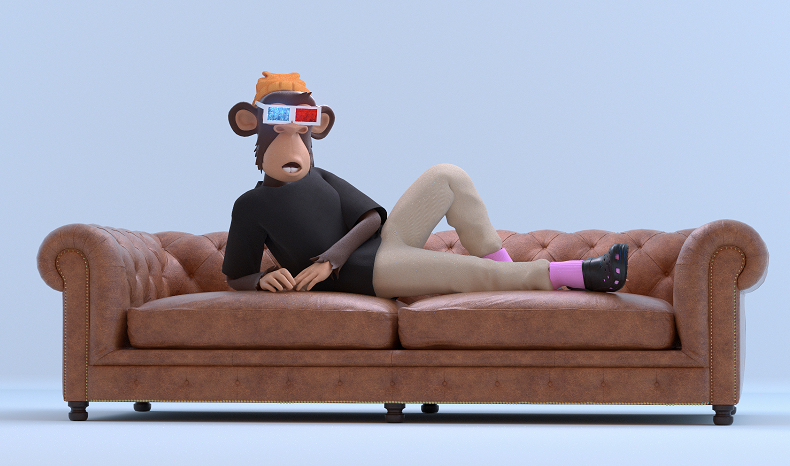 New York, New York – July 22, 2022 – Known to those in the metaverse as Bored Ape #9184, digital dance music artist Ape Rave Club delivered a floor-filler house anthem “Dance Alone,” which is now available on all digital streaming platforms HERE. As expected from a next generation artist, Ape Rave Club flexes a clean-cut futuristic production style with distorted vocals that conjure a hypnotic trance with the lyrics “I dance alone inside my mind/I don’t know what goes on inside outside’” as a rhythmic kick holds a steady tech-house groove. Whilst the first tantalizing build drops into jackin’ electro breaks with heavy basslines, expect the unexpected as Ape Rave Club follows up with a bright keys melody that nods to early house music roots.

Ape Rave Club is also set to become the first ever NFT-ed artist to perform at Belgium’s Tomorrowland; one of the biggest EDM Festivals on the planet. The concept, which sets its focus on a Bored Ape NFT, will be performing on the Tomorrowland mainstage Sunday, July 24. The exciting and groundbreaking performance will be the first of its kind, and it’s promised to be a one-of-a-kind visual spectacle as Ape Rave Club bridges the physical world with the metaverse. It will be the first time a digital entity, not a person, takes the festival’s main stage.

Ape Rave Club is a part of the renowned NFT community ‘Bored Ape Yacht Club’ – a collection of 10,000 unique Bored Ape NFTs – with an A-lister crew backing that includes Justin Bieber, Eminem, Paris Hilton and Neymar JR among others.

Making history in both the NFT and music realm, the digitally-born artist is sharing the Tomorrowland mainstage with EDM legends Alesso, Martin Garrix, Tiesto, Armin Van Buuren and Marshmello. The event annually attracts 600,000 live attendees and millions of fans across the globe via live stream, which is set to be quite the debut for Ape Rave Club’s first-ever live appearance. This  is only the beginning of what’s to come for Ape Rave Club.

Ape Rave Club is one of the world’s first artists born on the blockchain. The brainchild of Bored Ape Yacht Club, one of the most well-known NFT communities globally, counting Steph Curry, Mark Cuban, Justin Beiber, and Paris Hilton as members. With plans to release original music via NFT platforms, they join Wuki’s Wobblebug as one of the world’s first decentralized artists. Ape Rave Club is here to bring a new generation of artists to the electronic music scene. Backed by some of the most exciting producers and creatives in dance music and NFTs, they are excited to shape the future of music in web3.

Future of Bitcoin Trading in Bermuda

How to Sell Your Essay in the NFT?