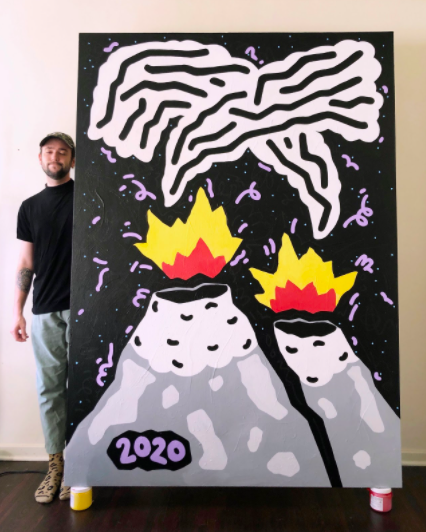 Chance Cooper was born on February 21, 1991 in Los Angeles, California. Chance didn’t grow up hoping to become an artist. In fact, he never went to an esteemed art school or even took classes growing up. Instead, his now-highly acclaimed style developed out of the ebbs and flows of everyday life in the 21st century. All of the weird, wonderful and downright dirty fragments of the new millenia are wrapped up in his work, which has been displayed in galleries and collections across the world. Despite Chance’s humble answer, he has since grown quite the following in the West Coast art scene. Chance’s pieces now hang in the homes of people like film director Nick Cassavetes, an early sponsor of Chance’s work. His paintings have graced the halls of several major galleries in LA, as well, drawing comparisons to artists like Keith Haring, the New York artist who so influenced the style of the 80’s with his plays on street art and Memphis Group squiggles. Yet these simple comparisons don’t capture the true scope of Chance’s work, as he builds a far more diverse portfolio than just wall pieces. As Chance has grown as an artist, so has his following. With a sizable presence on Instagram and his art in a number of galleries and collections, Chance hopes to begin flexing his artistic muscles and diving deeper into the cigarette-studded cartoon world of his imagination. Look past the poppy Haring-squiggles and you will find an entire world underneath Chance’s pieces; a world that knows the pain of social injustice, that responds when the world cries out and offers a new point of view, instead of just another desultory commentary. Chance’s inspiring words perhaps bely a greater understanding of this messed up world than many see on the surface. As his work gains traction and followers build, Chance’s ability to connect the quotidian with the spiritual, the adult with the childlike, and the weirdness with the rhythm of normal life has captured the feelings of a whole new generation in the art scene. Instead of drawing an idealized or fantasized version of life, Chance’s abstractions instead pull us closer to reality, and force us to confront what has been right under our noses all along. Follow Chance Cooper on Instagram or visit his website to discover his latest work and keep up to date with new shows and events.
Related Topics:ArtChance CooperPainter
Up Next

Never Settle for Anything Less than Flawless: In Conversation with Nicholas Flathau