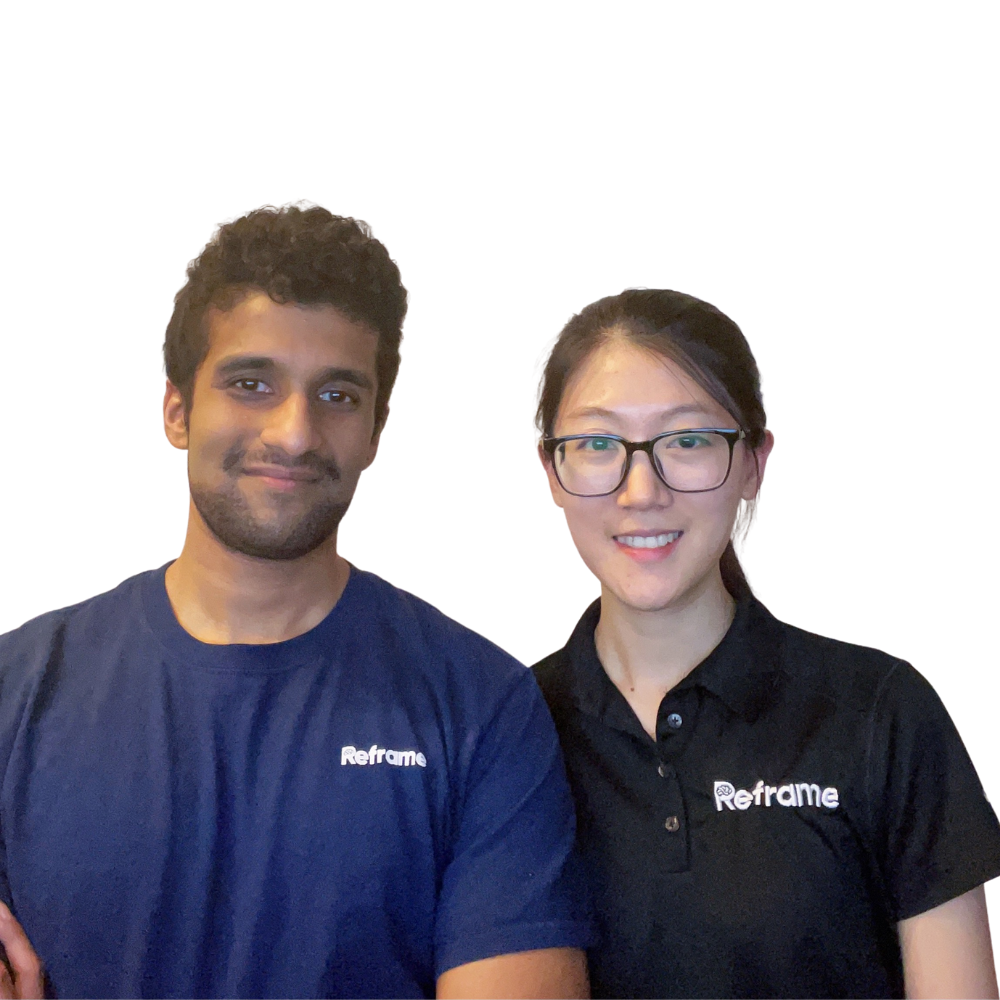 Founded in 2019, by Ziyi Gao and Vedant Pradeep, two Georgia Tech graduates, Reframe was created to address the growing concerns the COVID-19 pandemic brought upon individuals who during quarantine and restrictions, increased their dependence on alcohol.

What started in March 2020 as a “digital recovery center,” as Pradeep described it, eventually became what is now known as the Reframe app. The mobile holds itself out to be the world’s #1 neuroscience-based app to help people quit or cut back on alcohol use by bringing private, affordable care to smartphones by enabling people to break free from a “negative habit loop” and cultivate healthier behaviors, on-demand, according to The Atlanta Journal Constitution.

Both Gao (COO) and Pradeep (CEO), who met in a chemical engineering class at Georgia Tech, were also in Tech’s CREATE-X startup launch program for student entrepreneurs. The duo worked together on an app to help people with OCD, or obsessive-compulsive disorder recognize and potentially stop their compulsions. This project integrated personal experiences Pradeep has had with OCD, according to an interview with Patch.com.

“You have these compulsions that come up and when you’re in the middle of it, you feel like it’s going to be endless and you also feel like…you understand what’s going on but you’re not sure about what to do or how long it’s going to last,” Pradeep said. “That’s when we decided, ‘Maybe we need to do something about that.'”

The duo have worked with and continue to regularly consult with doctors at Emory University and Johns Hopkins, who agreed that a project like this would be more effective for those struggling with alcohol dependence. Both Reframe and the duo’s first project with CREATE-X, have strikingly similar objectives, due to the prevalence of “compulsions.”

“It actually made sense [to switch gears] because cravings are like close cousins of compulsions,” Pradeep said. “After talking to about 100 more health care professionals in the next few days after that, we decided to shift over to this space.”

It is no surprise that alcohol and substance abuse recovery have unfortunately continued to be stigmatized, creating pre-conceived (and often inaccurate) notions as to the benefits programs like AA and others can provide to recovery patients.

“From a market perspective, studies show 25% of Americans are excessive alcohol users, yet less than 5% of people actually seek any help,” according to Albert Gimbel, Partner at Atlanta Ventures. Gimbel also emphasized the ongoing stigmatization:

“Formal programs like AA and recovery centers can be helpful, but are either too stigmatized or too expensive for most people,” he continued.

It’s why we continue to see the demand for and interest in telehealth and other digital mental health services surfaces. Cope Notes is a digital subscription service which launched in 2018, and skyrocketed at the onset of the pandemic, which utilizes daily text messages to improve declining mental health states among the most vulnerable of society, front those struggling with mild anxiety or depression, to at-risk suicidal individuals.

Crowder, the CEO and founder of Cope Notes, is a suicide/abuse survivor and metal musician, who discovered while touring with his band “Prison” that something was missing. Crowder, who has struggled with depression, anxiety, and OCD among other ailments, left him searching for alternative ways to dig out of the hole, creating a daily, random test message subscription service that is centered around positive messages, which over time, help to rewire the brain.

“Every text is written by peers with firsthand experience overcoming trauma, illness, abuse, or loss. Then, they’re reviewed by a panel of mental health professionals before being delivered at random times to interrupt negative thought patterns,” Crowder told Jennifer Eckhart in an interview with Thrive Global. “Over time, these simple texts train your brain to think healthier thoughts.” And it comes for “less than the average price of a single therapy session.”

The Costs Are Ridiculous

The other barrier to entry, as Reframe points out, is the costs to obtain treatment and enroll in recovery centers.

“By making a solution that is more affordable, accessible, and accountable to change beliefs, build habits, and manage cravings we believe this can open up a large and underserved market (alcohol support) with additional broader underserved markets (drug abuse, mental health) to come in the future. We believe in the passion, talent, and hustle of the founding team, Vedant and Ziyi, coupled with the ability to provide a new digital way of solving a growing problem and unlocking a large underserved market.”

According to Pradeep, going to a recovery center can cost between $10,000 and $20,000 per month, which provides an advantage to the Reframe app which offers a price “at least an order of magnitude lower,” with monthly plans costing under $10 per month.

Taking these concerns into account, Gao and Pradeep spoke with over 700 engineers, doctors, patients, and business advisors over the course of three years, prior to launching Reframe in July 2020.

“The people coming on our app were not really people who wouldn’t ever go to a recovery center. They were people that wanted to help themselves but wouldn’t even go get therapeutic help, and this was a medium that they could use to help themselves,” Pradeep said. “The pandemic has hit people really, really hard.”

The research behind the app was based on cognitive behavioral research, building on four pillars–structured guidance, integrated tools, repetition/reward, and community-building. With the help of Emory University and Johns Hopkins, Gao and Pradeep developed a 120-day evidence-based program with more than 50 integrated tools, tasks, and activities with rewards for completion.

The Successful Seed Round…Now What?

“Alcoholism is the third-leading preventable cause of death in the U.S.,” Pradeep points out. “We want[ed] to provide an affordable solution for those looking to cut back or quit drinking with an effective, evidence-based tool that guides people through a path to healthier drinking habits. I’m so grateful to all our investors for helping us to continue to work towards building the most comprehensive tool for encouraging people to thrive.”

Turning to its recent seed round, Reframe intends to use the seed funding to build new offerings within the platform to incorporate fitness, nutrition, relationships, and self-care to round-out and extend the needs of mental health and wellness.

Specifically, the company says it will be upgrading Reframe’s reduction program to offer a more customizable experience for the unique needs of the user. Specifically, the ability to hold users accountable is a major benefit from the low-budget subscription program.

Reframe’s premium 1-on-1 coaching programs provide users with unlimited access to world-class coaches to further increase accountability. “We need to scale our mission to meet the demand for those seeking refuge from the debilitation associated with excessive alcohol use over the last year,” Gao told Disrupt Magazine.

Since the company launched, Reframe has obtained over 4,000 customers with impressive user-reported results. The company recently reported that 71% of its users disclosed that “they’ve significantly reduced drinking” and 50% of people reporting that they’ve quit drinking altogether.

“The light at the end of this tunnel is that we are seeing more and more people beginning to explore health and wellness and taking hold of their well-being and seeking ways to self-care, we are here for them.”

Can You Describe Your Life’s Work in One Sentence?