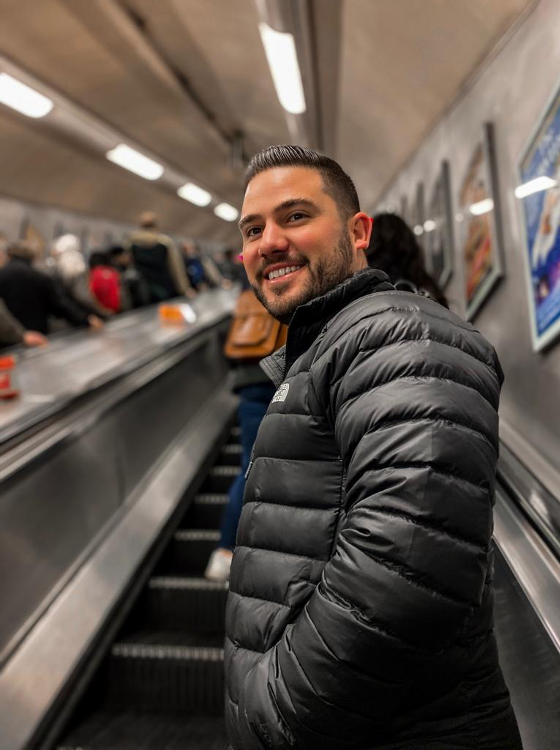 When Prizeout, a New York-based financial technology company, announced it had closed its series A financing this May, Richard Blankenship was listed as a cofounder in the press release. In some ways it’s an unlikely affiliation for 29-year-old Blankenship, a Las Vegas-based entrepreneur who cut his teeth in the gaming and real estate industries.

Blankenship’s story is a familiar one. It shares much in common with some of this era’s greatest profiles in entrepreneurship. While some of his classmates coasted to Latin honors, Blankenship spent hours reviewing course material and attending office hours. Though his teammates effortlessly shot under par, Blankenship spent his mornings studying and perfecting his swing. And while some of his peers used their family resources to join the international jet set, Blankenship deployed the resources at his disposal into his businesses.

Blankenship never took the easy path, and he wouldn’t have it any other way. Blankenship says, “I saw how some of my friends were going off to Harvard and some of them were getting jobs through family connections, and I knew that I needed to take a different strategy. Even if those opportunities had been open to me, I wouldn’t have been able to take them. I knew that the greatest satisfaction would come from trying to build something special myself – applying my work ethic to the opportunities available to me.”

Buy the Ticket, Take the Ride

After graduating from San Diego State University in 2013 with a degree in finance, Blankenship and his childhood best friend, Sam Simmons, formed a real estate partnership that targeted single-family homes in the Chicago area. “This was an area that desperately needed investment,” commented Blankenship. “These communities were devastated by the recession and were left behind by the recovery. Some of the homes we were purchasing had been vandalized or burglarized. These were not dignified places to live.”

Over five years Blankenship and his partner raised and invested $10 million in sixty homes in the Chicago area. “I’m so proud of this,” Blankenship added. “At every stop in my career I’ve tried to give value to people, but few things are as gratifying as handing the keys to a renovated home over to a family.”

Recently, Blankenship has focused his career on B2B sales. The lead investor in his real estate partnership offered him a position on the sales team of his poker media business, Poker Central. Blankenship started in an entry level position and rose to be the company’s Chief Revenue Officer. “It wasn’t an easy transition,” Blankenship added. “My experience at Poker Central taught me how important it is to find a mentor, though. Joe Kakaty, the company’s Chief Sales Officer, celebrated me when I succeeded and shielded me when I failed. He gave me the space to develop.”

Empower Yourself by Empowering Others

As he found monetary success, Blankenship has provided angel funding to other entrepreneurs he believes in, amassing a venture capital portfolio most full-time investors would be envious of. He’s a seed investor in CUTS, a men’s apparel company, and MightyKidz, one of the fastest-growing childcare facilities in the US and #344 on the INC 5000 list. He’s also a series B investor in Triller, a US-based Tik Tok rival.

“I’ve gotten to where I am because people took a chance on me,” Blankenship commented. “I get a rush from meeting with an entrepreneur and learning about a problem that their product or service solves. As an investor, I get to fund a solution. I’m underwriting value these startups are bringing to their customers.”

In 2019 Blankenship met with serial entrepreneur David Metz to discuss an investment in Prizeout, a NY-based financial technology company. Blankenship says, “I knew this one was special. From my experience in the poker industry I knew there were companies out there sitting on billions of dollars’ worth of user funds. When a user withdraws those funds, their options are limited. Prizeout uses gift cards to help consumers get their funds faster. Some merchants even offer cash out bonuses for users, allowing them to get more for their money.” The idea resonated with Blankenship. He made a handshake deal with Metz and immediately wired him the investment money. Blankenship later joined Prizeout full-time as a Cofounder and Chief Revenue Officer.

Asked for comment, Metz replied via email, “Richard is one of those people you meet in life who through relentless hard work has given himself a head-start. He’s on calls all hours of the day, and he has directly contributed to Prizeout’s biggest milestones – on-boarding our biggest partners, making key merchant introductions, and most recently, closing our over-subscribed series A in the middle of a pandemic.”

Work Hard, and Be Kind

Blankenship’s tenacity has taken him from real estate in Chicago, to poker media in Las Vegas, to financial technology in New York. Less than ten years into his career he’s known by some as an investor, by others as an executive, and by others still as a mentor. As for Blankenship, he says it’s as simple as adding value. “Sometimes that’s through entrepreneurship – improving the lives of customers through a product or a service. Other times that’s more personal – mentoring someone so they grow into the best professional they can be.” His philosophy is perhaps best captured by a phrase he keeps printed and framed on his desk: “Work hard, and be kind.”

To keep up with Richard Blankenship and to learn more about his entrepreneurial journey, find him on Linkedin or Instagram.

Related Topics:EntrepreneurRichard Blankenship
Up Next

Meet Vancouver Artist Raeliss – How He Turned His Life Around