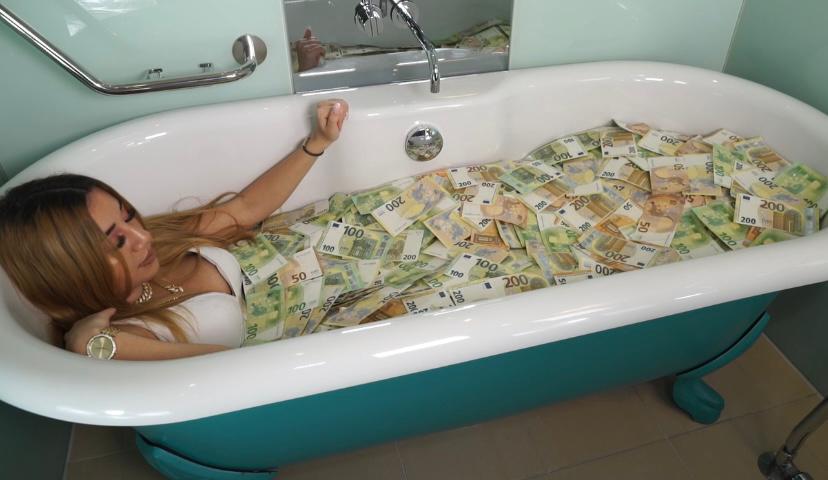 Newcomer Sallie Spring AKA Moneygirl is going viral showing herself in a bathtub full of money ! She is definitely the most interested Newcomer ! Her song “Drip” was posted by the popular internet sites Worldstar HipHop and RapTv , which brought her a lot of views and attention. She now hit half a million views! Also other famous celebrities like Woah Vicky used her song, so she has risen quickly . Spring has also become a Meme more than two times, where her song got compared to a “nickelodeon show song” or where she is showing herself taking a bath with money , there she was again a big theme in the internet which also got her even more Fame. The message of Drip is that “everyone showers with water while she does it with money.” Even Justin Bieber and Madison Beer followed Sallie on Twitter. On August 2021 Darrale Jones from Atlantic Records contacted her and sent her a major Label contract. If she signed or not is unknown. We would love to see her in the charts! She announced that her new song „Big Boss“ will be released soon. „It will be something really different“ , „I really wanna make different type of music directions to gain as many people as possible , also i’m really diverse , i wanna try different sides of music.“ Sallie said that music is the most important thing to her and she would never quit. She doesn’t care about any haters , she just loves her fans . Besides music sallie also took private acting classes and became a job on Netflix and other German Tv series , which she showed on her Instagram. Also , she just started modeling and got some jobs already “ I love photoshoots, it just makes me feel like a star! I feel pretty and sexy while doin poses and i feel really comfortable when cameras are around me. I just love to be in the spotlight, no matter if it is on film set , on modeling shoots or on my own music video! I‘m a born star!“ It is confirmed that she has colombian roots , so she also want to do spanish music in the future. Spring said that she is addicted to Fame and Money and would do anything to come up. Now she also started an Onlyfans Account , where she shows sexy photos of herself. Moneygirl is definitely interesting to watch and talk about , so you should definitely check her out.