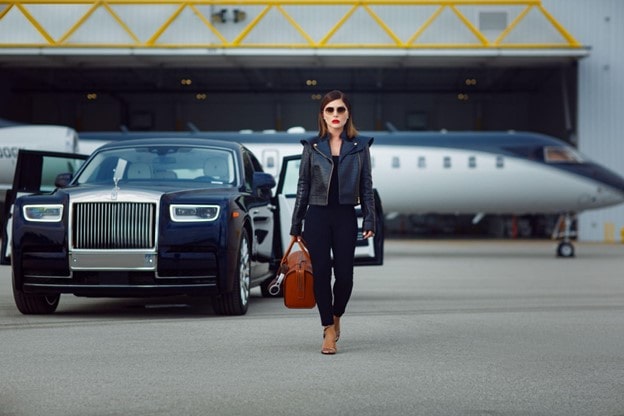 Though concentrated efforts have been made over the past couple of decades toward creating a more gender-equitable work environment, there’s still plenty of progress to be made. While the number of female CEOs and managing directors spiked to 26 percent in 2021, an 11 percent increase from 2019, 74 percent of these high-level leadership roles is still occupied by men.

Part of the issue can be attributed to societal standards; according to Harvard Business Review, women in the workplace consistently tone down their inherent femininity to be accepted by their male peers. And in the fast-paced, cut-throat world of modern business, blending into the background with “intentional invisibility” can oftentimes cause women to be overlooked in the workplace, passed over for deserved opportunities for career advancement in favor of their visibly assertive male coworkers. Still, a number of women who have embraced their femininity to the fullest and approaching the workplace with confidence are paving the way for a new era of female empowerment in the business world, showing that you can have it all, without sacrificing any authenticity along the way.

With female marketing executive Stephanie Shojaee recently assuming the role of president at multi-billion-dollar development firm Shoma Group, the barrier-breaking CMO is certainly up for the task – and paving the way for other women to follow in her wake. Though having gained repute on social media for her sophisticated personal style, extensive collection of couture, and loving relationship with husband Masoud Shojaee, it’s Stephanie’s business prowess and marketing knowledge that have really made an impact on the world stage, gaining acknowledgment across the international community for Stephanie’s effective strategy implementation at Shoma Group. Now, as the firm’s official new president, Stephanie reveals what forward-thinking strategies and plans she has in store next for the developing giant.

Though already well-involved in Shoma Group’s multi-family developments (it was Stephanie’s special touch and marketing tactics that led the company’s $150 million Oasis Park Square project to sell out), Stephanie’s fine-tuned understanding of client and consumer desires is expected to manifest itself in cutting-edge amenities added across Shoma Group’s upcoming projects. Bringing these ideas into a tangible reality, Shoma Group’s subsequent new developments – including those now in-progress in Hialeah, North Bay Village and Miami – will all be anchored with a unique food hall concept dreamed up by Stephanie called Shoma Bazaar, where all of the concept’s vendors will be carefully selected by Stephanie herself, as are all the tenants of Shoma Group’s commercial holdings.

An integral part of Stephanie’s reputation as a paradigm-shifting leader in real estate has come from her commitment to giving women the platform and encouragement to succeed, while leading by example on how female business leaders can thrive in a male-dominated industry without sacrificing their womanhood. Beyond creating an all-female marketing team within Shoma Group, social media has become a key outlet for Stephanie to provide her learned tools of the trade – plus an extra dose of lifestyle and fashion inspiration – to her audience of nearly 400,000 Instagram followers.

“I especially like to show people the daily happenings in our office and in my work life because I feel it’s important to give visibility to women professionals, particularly in leadership roles,” says Stephanie. “In my industry very few developers are women, but the more examples young girls and women see, the more likely they are to imagine themselves in those positions and pursue them. And because I post a lot about luxury, I want to show people that I actually put in the work every day – and I love it.”

“For me, dressing and acting like a lady makes me feel poised for success,” shares Stephanie. “A great pair of heels always helps with confidence – they allow you to take up more physical space and they often make noise with each footstep, calling attention to your presence. Take care of your personal appearance so you look and feel like you’re at your best. And never underestimate the impact of dressing up. As Tom Ford said, ‘Dressing well is a form of good manners.’”

Moving forward, Stephanie likewise intends to continue growing the Shoma Group subdivision Shoma MGMT, which takes care of the leasing and management for all of Shoma Group’s rental apartment communities. Stephanie also aims to create Shoma Group’s inaugural affordable housing division underneath her presidency, which would help Shoma Group give back to the Miami area and its residents from the ground up, as well as lay the foundations for a better future for Miami’s lower-income population.

As for the rest of the world? While they may have to wait for their own chance to host a Shoma Group build, Stephanie says the company “is not ruling anything out” as it expands beyond its native Miami, Florida.

“I would love to see us in California, Texas, Mexico, and, hopefully, soon in Colombia,” says Stephanie, who hails from Colombian origins herself. “If the demand continues to be there, Europe is an option as well.”

“In 10 years, Shoma will have removed the already high bar and placed it much higher,” concludes Stephanie. “Our rental communities, mixed-use projects and management company will continue to be in a league of their own. Shoma has always been a builder who is synonymous with quality and innovative ideas; the Shoma brand is already widely known in south Florida, but in 10 years, Shoma will be a brand that is known within the United States and internationally.”

With ambition and style in spades – plus, the work ethic to match – Stephanie’s already-proven track record certainly bodes well for Shoma Group’s future as the executive’s major plans for the company begin to take shape under her meticulous care.

How One Woman Is Advocating for Women Navigating through the Psychological Effects of Breast Implants, A Founder’s Story with Dr. Amanda Savage Brown

Developing a Competitive Edge for Job Seekers with Bobbiette Swanson