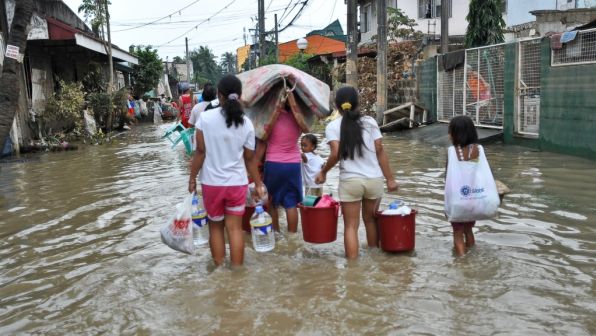 In the wake of the UN’s 2021 IPCC Sixth Assessment Report world leaders have certainly been making bold proclamations about what steps we can take to create more sustainable societies. Of course in practice, we’ve grown used to those same leaders failing in their commitments when push comes to shove. This inadequacy is especially dangerous as nations begin to feel the effects of inevitable environmental hazards and irreversible property damage.

If current temperature trends continue, nearly 20% of the earth’s surface is projected to be virtually uninhabitable by 2070. If this change were to occur. This would trigger the most significant human migratory shift in recorded history and ultimately displace billions of people.

While international collectives like the Paris Accord and Global Compact for Migration do address the need to set more humane immigration standards in the face of Climate Change, they have failed to address issues that can not go ignored. For one, at the international level there is no legal precedent for obtaining refugee status for stressors caused by environmental hazards. Then, even when it comes to domestic affairs, many nations have no consistent policies set to help displaced citizens.

Case in point, within the United States there are plenty of recovery programs that exist to assist residents following a disaster, however there are no established government programs to answer a need for preemptive relocation efforts. This lack of action persists even when multiple communities within the U.S. have already been utterly destroyed by unavoidable environmental hazards (ex: erosion, flooding, etc).

Without action, a vast amount of suffering will plague those in areas that face the greatest hazards from Climate Change. This is especially true for those who live in poorer nations that are unable to easily recover from disasters and economic threats. Naturally then, as the international community determines its true priorities in climate reform, we should be wary of those who do not even consider the implications of large-scale displacement.

For quite some time now, United States residents have been increasingly displaced from their homes as a direct result of environmental threats. That’s par for the course given that major metropolitan areas like New York, Phoenix, Miami, and more all face threats to their habitability and sustainable growth due to the growing severity of droughts, hurricanes, and changing temperatures. What’s more, current housing patterns in the U.S. have shown that regions with the worst Climate Change projections are also seeing the most population growth as the nation becomes more urbanized.

Ultimately, the situation is the definition of precarious. In its current state, the mechanics of U.S. Disaster Relief Programs are extremely reactionary in practice, hindering their ability to respond to increasingly frequent natural disasters. The Federal Emergency Management Agency’s Hazard Mitigation Grant Program (HMGP) is often used as a means of financially assisting communities that have been affected by a disaster after the fact, but there is currently no program in place that can preemptively assist people who are facing displacement due to an imminent disaster. While FEMA does offer Preparedness Grants for infrastructure projects, one should recognize that these funds don’t cover the cost of permanent relocation projects. Additionally, even if communities are given enough funding to constantly rebuild, there are still issues of cost effectiveness and safety to consider. At a certain point it becomes more viable to move to a safer location than face a constant onslaught of environmental disasters.

It’s important to recognize that this is not a new issue either. Communities within the United States have had a need for relocation programs for decades now, making this a well overdue challenge to resolve. One particularly important example of this can be seen in the resettlement project of the Isle de Jean Charles. Residents of this island on the coast of Louisiana (with a majority indeginous Native American population) had been working on moving households threatened by rapid erosion for nearly 20 years before receiving government funding in 2016. Up until that point, the community had been self-funding their project with the help of occasional private donations.

Thankfully, at the very least, federal officials have been making a point to acknowledge this issue in recent years. Last year, the U.S. Government Accountability Office conducted an assessment of our current mitigation capabilities and our ultimate need for a Climate Migration Pilot Program. Its final pages contain a very concrete judgement of the issues at hand:

Where communities have chosen to migrate, unclear federal leadership has increased the length and complexity of the migration process, increasing the risk to lives and property, and increasing the fiscal exposure of the federal government. Currently, federal programs that provide assistance to communities for infrastructure, housing, or disaster recovery are not designed to address projects with the scope and complexity of climate migration.

Hopefully the agency’s recommendation will produce results from the federal government within the next few years. Until then however, Americans remain at the mercy of our current processes and an ever changing climate.

Meet Syed Shabeen Lebbe, Enthralling People With His Innate Skills As a Musician