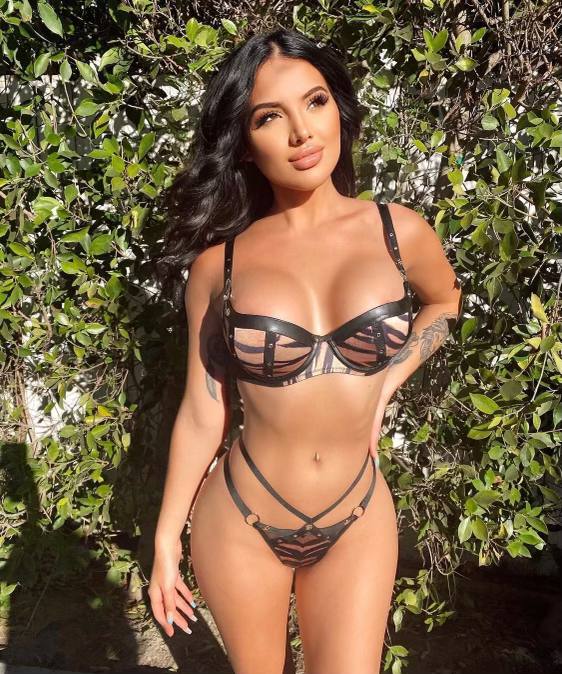 Riley Riviera credits her parents for instilling in her the importance of physical health and self-care. The daughter of two endurance athletes (her mother is an ultra- runner and her father is an open water swimmer), her parents applied the same focus on healthy eating and fitness in her rearing that they adhered to. Growing up in Jacksonville Beach, Florida, she had no shortage of options when looking for ways to be active and enjoy the sunny weather. “I spent lots of time in the sun surfing, doing yoga, and working out,” Riley says. While she is no longer a Florida resident, Riley says that she is grateful that her parents taught her the value of healthy living. It’s a commitment she takes very seriously. A practicing vegan for seven years now, Riley states that while her physical wellbeing is still very important to her, she has come to look at the subject of personal health from a more rounded, holistic lens. Since moving from Florida to Los Angeles, she has learned that mental health, embracing her

femininity, and self-expression are just as important as fitness. While she’s quick to point out that her development as a person hasn’t been without difficulty, she’s proud of the journey she’s been on. She’s taken all the lessons and experience she’s had from childhood till now and found a way to apply to helping other women like herself, through her upcoming management company, OnlyBabes.

While her parents did an excellent job of teaching her the value of physical health, Riley notes that her parents were also very restrictive when it came to other parts of life, and by

extension, other aspects of health as well. Her upbringing was the opposite of conservative, and she often felt like she was being prevented from exploring and expressing who she was as an individual.

“As a kid I was never allowed to express my femininity in the way I wanted to,” she notes, “I wasn’t allowed to wear makeup, have earrings, or be involved in any sports or activities that were “too girly”.” With those options off the table, she looked for other ways to express herself, dabbling in music and painting. However, neither of these ever managed to bridge the gap completely. She started to take an interest in modeling, but states that she initially struggled due to the fact that her body type didn’t match the “typical high fashion, super tall and skinny model.” Undeterred, she shifted her focus to bikini and fitness modeling, and instantly her fortunes changed. She signed to her first modeling agency when she was sixteen, and found the

profession gave her a sense of empowerment beyond anything else she had experienced at the time. “Modeling became an outlet for me to empower myself and fulfill my creative visions.” It also gave her a new goal to focus on in addition to maintaining physical fitness. “When I get a vision of the perfect photo in my head, I know exactly how to bring it to life and I don’t stop until it’s absolute.” Riley says that a spontaneous trip to Southern California in 2018 opened her eyes to a world of opportunity outside of her comfort zone, and soon after that trip she made up her mind to move permanently, armed with two suitcases and endless ambition. Having fully stepped into adulthood, Riley was free to explore other avenues of self-expression, and to find out who she really was. For her, the vehicle for this journey of self-discovery was OnlyFans. “OnlyFans turned my creativity and desire to express myself into a career…I found that the platform allowed me to fully and freely express my femininity and sexuality with no limits.” However, while she found this new freedom to be an immense blessing, she admits that she was also naive to the darker side of the industry. She signed to an OnlyFans management agency, believing it would help further her career in the field, but soon found herself being exploited. The deal entitled the agency to 60% of all her earnings, and a year in, Riley realized that she was being manipulated and controlled rather than being given the freedom and purpose that had originally made the platform appeal to her. “I knew I had to get out,” she reflects, stating that allowing someone else to have so much control over her was a betrayal of her values. Riley believes that the negative experience opened her eyes to how easy it can be for young women to fall into similar situations when they are vulnerable and new to the industry. “The first thought I had after leaving was this is still happening to hundreds of girls that are just like me.”

Riley knew she had to do something and began aiming her creativity towrd finding a solution. She took control of her OnlyFans account and rebranded all her social media. Then she began searching for a way to help other girls avoid falling victim to the same treatment she had. “I had so many girls coming to me for help with growing their pages and reading their contracts, that’s when I got the idea.”

Seeing so many women in need of guidance and looking up to her for it inspired Riley to take action. She started her own management company, OnlyBabes, an “All-women organization devoted to keeping girls safe while helping them reach their full potential in all categories of social media.” It’s clear when she speaks about this that she has never felt so passionate about something in her life. “I want this to be about them,” Riley says, “that’s why I’m dedicated to keeping each model’s individuality and using their unique qualities to their advantage, instead of pushing them to conform into a popular and uncomfortable standard.” Riley points out that OnlyBabes is more than a business to her, it’s a commitment to taking back the industry for all women. “While everything I went through hurt, it prepared me for this and gave me my calling.” Slated to officially launch in June, OnlyBabes will serve as a safe haven and unrestrictive management entity. The company’s slogan: “Your body. Your bag.” is meant to signify the right of each woman to express themselves fully, freely, and to keep what they earn through that expression. By using an ethical business model, Riley hopes that OnlyBabes will also bring to light the toxic and dehumanizing norms of the industry and show women that they can be successful online without submitting to the pressures of men in power. “My goal is to support girls in becoming their own boss,” an energized Riley proclaims, “I believe all women can win together and I’m so excited to create a community of boss babes.” For Riley, it’s just an evolution of her focus on health, the health that comes from personal freedom and living life on your terms. Part of this commitment comes from her upbringing, and part of it comes from her independence. Now, she’s found a way to give that same freedom to others.

Why ‘Sugar’ is Terrible for the Cannabis Community, Explains Sensi Co-Founder Lisa Tollner