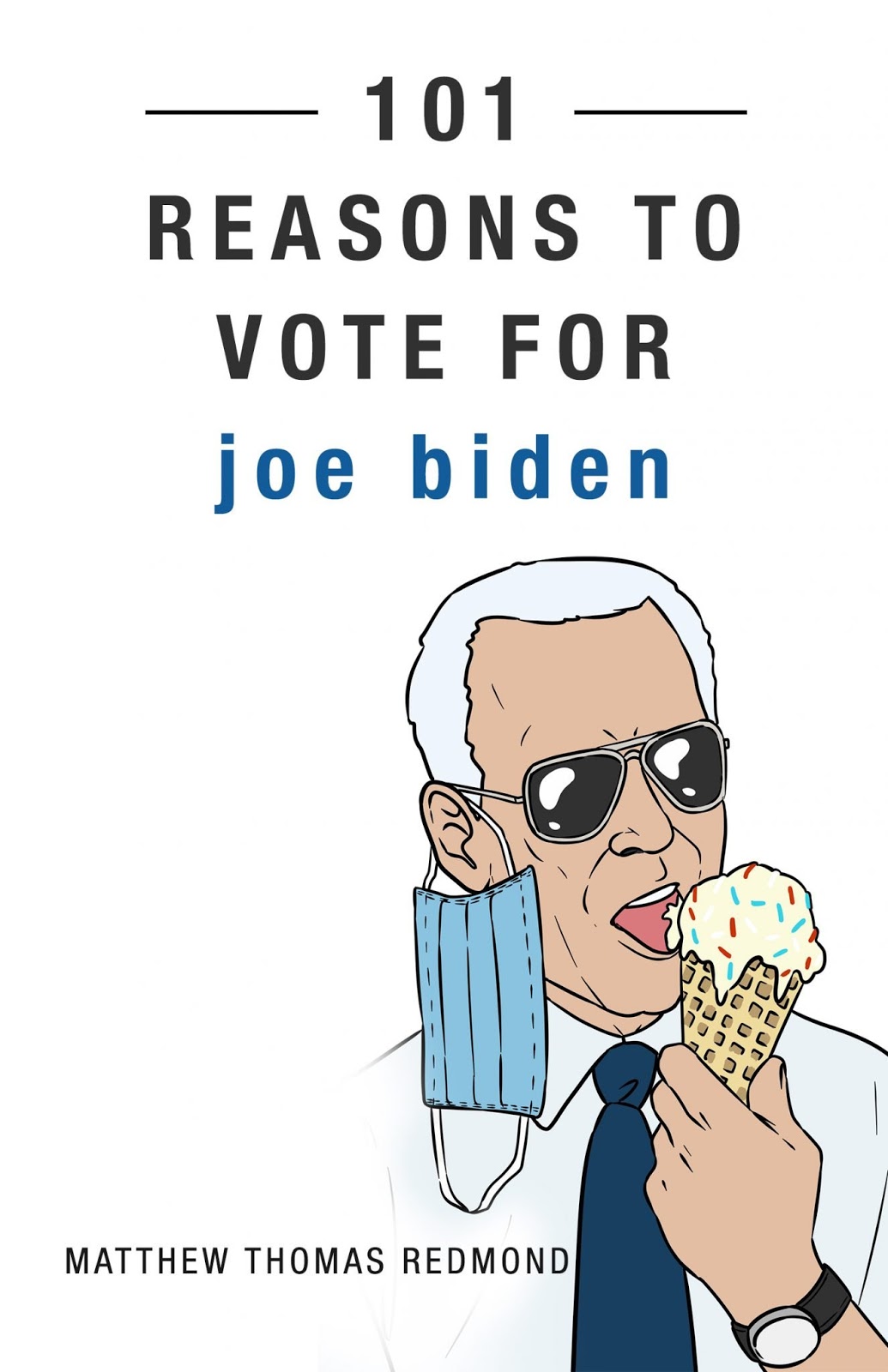 “If people would only listen to reason… this world would be a better place,” remarked Matthew Thomas Redmond, a Maryland born political commentator and author of 101 Reasons to Vote for Joe Biden. What readers of his work will sure to be shocked by is that the pages dedicated to these 101 reasons are blank. This intentional literary contribution (or lack thereof) serves to express the reasons Redmond believes Americans should vote for Joe Biden, which are none.

As an anti-Biden pro-Trump supporter, Redmond’s perspective as a young, black, educated veteran provides a stark contrast to the typical older, white, less educated trump supporter we often read so much about. The 101 blank pages of his book are followed by an essay backing his position as a Trump supporter, pulling on compelling statistics and examples to further the credibility of his work. 101 Reasons To Vote for Joe Biden is a satirical prelude to the upcoming election created to encourage us all to stop taking everything so seriously, and to take a moment to enjoy some well-played humor.

Having developed a passion for politics at a young age, Matthew Thomas Redmond dates the origins of his career as a political commentator back to middle school. This period of his life saw the historical events of 9/11 unfold, followed by a national debate as to whether or not a war on Iraq should ensue. As a resident of Baltimore, Maryland, Redmond was born into one of the most politically active regions of the country, a birthright placing him at the epicenter of politics amongst such pinnacle times.

Through a high level of political exposure, Redmond developed a great understanding and appreciation for politics, inspiring his desire to use his voice to “pull people out of the echo chamber,” a chamber he refers to as being “a metaphorical description of a situation in which beliefs are amplified or reinforced by repetitive communication inside a closed system that insulates people from rebuttal.”

The Georgetown graduate actively involves himself in politics today by encouraging thoughtful and spirited political debates, a method that allows him to use his knowledge and voice to pull others out of said echo chamber. Redmond’s political beliefs do not debunk the respect he holds for others who’s perspectives differ, but further aid him to uncover credible information to support his personal views. Through educating and informing as opposed to discrediting and belittling, Redmond’s approach to political debate is one that invites others into a compelling conversation of how our decisions today will impact our world tomorrow.

If There Are Zero Reasons to Vote For Biden, Why Vote For Trump?

Though the irony of Redmond’s literary creation is that of a blank book in support of Biden, his work does provide readers with an intellectually charismatic snippet backing his position as a Trump supporter. Pages 118 through 126 share with readers his reasoning as to why he believes Donald Trump to be the superior candidate in this upcoming election. A fact that further intrigues readers is that Redmond does not fit the stereotypical mold of a Trump supporter.

With an emphasis on the use of “stereotypical” in this explanation, a recent article stated that “Labels such as ‘white nationalist,’ ‘populist,’ ‘redneck,’ ‘racist,’ ‘fascist,’ are frequently used to describe the stereotypical Trump supporter.” Redmond does not portray any of these labels but instead pulls on his university education, military experience, and political upbringing in creating thought-provoking arguments in favor of President Trump.

Donald Trump’s professional discourse is a rarity amongst politicians that never ceases to create shock-value while simultaneously providing quality entertainment. He has been known to make radical statements on stage and on Twitter, at times conjuring up particularly nasty insults to those who stand in the way of his objectives. When welcoming Joe Biden to the 2020 election, Trump Tweeted, “Welcome to the race Sleepy Joe. I only hope you have the intelligence, long in doubt, to wage a successful primary campaign.” Though not the first time Trump had used the nickname Sleepy Joe in reference to Joe Biden, it was the first time he directed it towards him as a competing presidential candidate.

Redmond fully backs Trump’s assertion that Joe Biden is best referred to as Sleepy Joe given the complete lack of positive impact he has had throughout his 47 year stint in politics, which began at the age of 30 when he became a U.S. Senator. Nearly five decades later, Redmond quotes former Obama Secretary of Defense Bob Gates in claiming that Biden “… has been wrong on nearly every major foreign policy and national security issue over the past four decades.” Redmond’s epilogue pulls on examples of Biden’s inadequacies to back Gates’ claim.

Donald Trump’s political experience is a mere fraction of what Joe Biden’s is. While Joe Biden spent his life walking the halls of the White House, Donald Trump walked along Wall Street. Suffice to say, Trump’s financial background and experience is something that only evidence can prove he’s brought to his position as America’s 45th president.

In his work, Redmond provides examples of the many ways that Trump has aided the American economy during his tenure through an outlook that is both refreshing and informative. Trump is a polarizing figure that many are quick to throw judgment at, however, statistics can provide a compelling economic argument that Redmond tactfully employs in his writing.

2020 has been marred by two tragically impactful events. The first was that of the COVID19 pandemic, which has effectively changed the trajectory of society. The second moment of impact was the murder of George Floyd, a black American, by Derek Chauvin, a former white police officer. This murder spurred nation-wide mayhem in a revolt against the current system in place, crying for a movement to “Defund the Police.”

Redmond argues that defunding the police “…would make life even more dangerous for black Americans living in our most distressed neighborhoods.” His writing suggests that Biden has done little to squash the movement, and goes on to further suggest that “Biden would literally be the worst president for black Americans imaginable” a statement which Redmond uses historical evidence to support.

Desmond Tutu is quoted in saying “Don’t raise your voice, improve your argument.” This sound piece of advice is beneficial for all to remember as we embark on election season. In 101 Reasons to Vote for Joe Biden Matthew Thomas Redmond effectively incorporates Tutu’s advice, constructing a compelling argument in favor of Trump while using the blank pages of his work to discredit Biden. Not only is Redmond’s book a creative gag-gift for Biden and Trump supporters alike, it also shares with readers the knowledge to allow them to further expand on their argument for whichever political party they are in favor of.

Further information about both Matthew Thomas Redmond and his book can be found on his website: https://sleepyjoebook.com/

What History Can Teach Us: Interview With Sama Mammadova